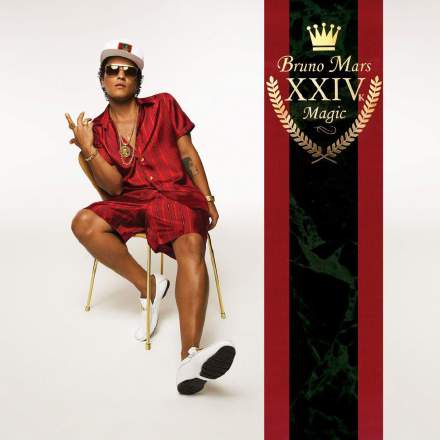 Ahoy there, cash-in on 'Uptown Funk'! We’ve been expecting you… Mind you, it’s hard to begrudge success to this polished and intelligent production, if only because of Bruno Mars' infectious enthusiasm — it’s like he can hardly believe he’s getting away with strutting his ’80s fetish into the charts again! What most turned my head, though, was the breakdown at 2:49-3:07, which manages to thoroughly subvert the otherwise comfortable predictability of the song’s eight-bar metric structure, despite being itself eight bars in length, so you lose a clear idea of where the downbeat is.

Like many psychological tricks, the art’s in the preparation. Specifically, before the breakdown hits, the producers have established strong connections between some key musical features and their position within the 4/4 bar. So the lyrical hook “twenty-four carat” always appears on the downbeat (eg. just before the breakdown at 2:20), and the primary kick hits almost always appear on beats one and three, albeit with periodic eighth-note or 16th-note pickups. So when we hit the breakdown, and the “twenty-four carat” hook starts on the second beat of the first bar, it suggests that the downbeat has slipped back a beat. The subsequent kick hit on beat four (with its eighth-note pickup) then suggests that it’s actually either beat one or three, the former seeming more likely because of the simultaneous strong chord change in the synth parts. But then the “twenty-four seven” is repeated on beat one of the second bar, providing the third possible downbeat interpretation within the space of five beats! Add to this the fragmentation of the hi-hat rhythm (which has so far been bashing eighth-notes most of the time ) into bursts of 16ths and 16th-note triplets, and it creates quite a rhythmically unsettling effect. It’s only after six bars of this that everything drops back into sync at 3:03, releasing the rhythmic tension to announce a two-bar build-up into the final chorus.

Another highlight for me is the way the mob vocals keep flipping between call-and-response and straight backup roles during the verses. Verse two is my favourite, starting off with the “hustlers”, “gangsters”, and “uh-oh” responses, before accenting the last backbeat of that four-bar section by joining with Mars' lead for “first” at 1:46. Then we’re back to call and response for “sip” and “dip”, before the unison lyric “money ain’t shit” (followed by the attention-grabbing a capella “ooh-ooh” arrangement drop at 1:51), and further quickfire call-and-response phrases on “way too fresh” and “hashtag blessed”. It’s all enough to leave me slightly giddy as a listener — which, I imagine, was rather the idea!