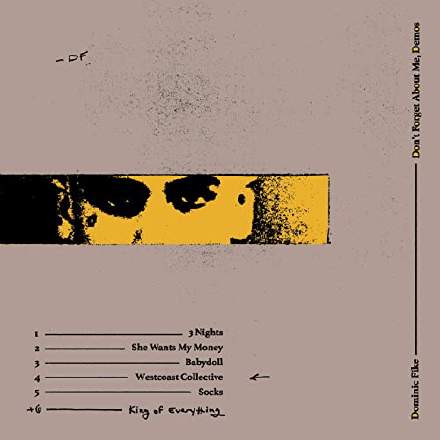 Two things really stand out from this production. The first is the vocal performance, which covers a tremendous expressive range. It starts off with the chilled attitude that permeates the layered opening chorus texture, as well as forming the baseline character of verse 1. After eight bars, though, it assumes a more playful mood, with nice little articulations such as the skipping “company” at 0:50 and the leap up to “like” at 0:57. Then after bar 16 he shifts up an octave into a cool raspy chest voice, but interspersed with lovely moments of layered falsetto. That high-register lead sound picks things up again in verse 2, but with a noticeably more assertive delivery, leading into my favourite moment of all: the gloriously ragged “too fucked up” at 1:53. But even though this seems like the performance high-point, he’s still got one more trick up his sleeve at 2:06, a brilliant bit of patter singing which sashays between straight and triplet rhythms so fluidly that you can scarcely see the joins — one of the most assured bits of creative groove-surfing I’ve heard in a while.

My second production highlight is more subtle, and best heard during the introduction. Notice how the backbeats seem to be accompanied by a burst of filtered noise. I suspect this is simply part of the claps sample they’re using, but there’s always the possibility that it’s been overlaid separately. Either way, this noise burst ends pretty much in tandem with its subsequent kick drum, and I think this helps make the kick stand out more. It also creates a kind of musical connection between the clap and kick, so that the programming feels less like a bunch of isolated events, and more like a kind of musical relay where each event is driving us forward to the next. This is something that I’ve always associated with people like Portishead and the Prodigy (I’m showing my age…), but it’s really easy to transport the idea into pretty much any style, as long as there’s some long-tail drums component that can be cut off by another — perhaps an open hat being stopped by a closed hi-hat, a sustained 808 kick by a snare, or a reversed cymbal by a kick.