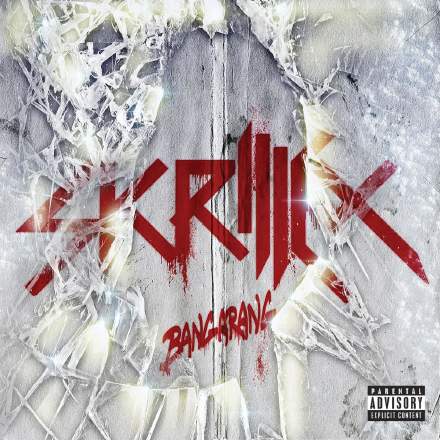 Although arguably best known for his twelve-tone composition technique, the iconoclastic Austrian composer Arnold Schoenberg also coined the term Klangfarbenmelodie (literally ‘sound colour melody’) in 1911 to refer to the process of shading a melodic line by assigning its different notes to different instruments. But it’s taken almost a century for someone to really catapult this idea into the mainstream, as Skrillex has effectively done by butt-editing chains of synth and sample snippets to create his crowd-slaying mega-riffs. I’ve been a huge fan of his productions since hearing ‘Scatta’ a few years back, and this latest Grammy-winning track amply demonstrates what I’m talking about.

The present-day Klangfarbenmelodie arrives for the first time with “Bangarang” at 0:25-1:01, and from a chart-music perspective it’s extraordinarily efficient because it only ever asks the listener to concentrate on two musical events at once: the drums, and whatever snippet of synth/sample audio is currently in the foreground. There’s rarely more than one musical pitch active at any one time either, partly because each audio snippet is kept so brutally distinct from the next — as when the second iteration of the “you feel good” sample at 0:42 is cut short when the rapped word “bass” interjects. While you can’t exactly whistle the tune of such a musical mosaic, there’s nonetheless an undeniable melodic character to it that sticks in the memory more assiduously than many traditional single-instrument melody lines. And of course the frenzied shifts of timbre and the contrasting acoustic spaces implied by the different samples constitute a barrage of attention-grabbing ear candy into the bargain.

Given that economy of means is such a powerful aid to successful communication in pop styles, it’s no surprise to find the Skrillex influence already cross-pollinating. However, what I’ve heard so far mostly amounts to simple pastiche (with predictable stuck-pig synth garnishings), so I reckon the market remains wide open for creative pop producers to capitalise on the Klangfarbenmelodie concept without any of the EDM baggage. I wonder who’ll pick up the gauntlet?