by Dev
feat. The Cataracs 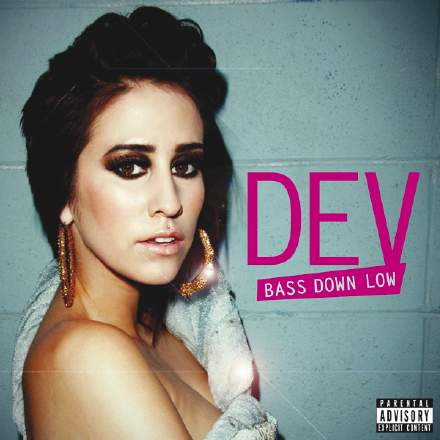 I was recently asked how to emulate the kinds of extrovert vocal effects that are all over tracks like this Dev single, so I thought it might be helpful to make some suggestions here, albeit without any insider knowledge of what gear or techniques were actually used.

The song is peppered with rhythmic stutter-editing, which is very easy to do using a DAW’s cut and paste tools, as long as you use very short fades at the edit points. A millisecond or so should be enough to avoid unwelcome clicks, while still retaining the juddering rhythmic flavour. The exact timing of the edits relative to that of the part itself will be critical, though. In this song, the vocals are all locked to the beat, so grid-based edits sound fine, but in other productions with looser vocals (or ones that are slightly pushed/pulled relative to the beat), that may not be the case.

For the main “bass down low” hook, I’d try an amp simulator with a cabinet resonance around 270Hz, and I’d almost certainly run this in parallel to the undistorted vocal channel to give more control over the fuzz levels and lyric intelligibility. If the parallel amp-simulation channel causes phase cancellation when mixed in, put a sub-millisecond delay or some kind of phase-matching device into the distortion return.

I’d mult the main Dev verse vocal (0:26-0:44 and 1:26-1:44) to a separate track, to give it its own heavy compression (leave a few milliseconds of attack time, so a few of those spitty transients get through), de-essing, and a good few decibels of ‘air’ boost at 15kHz or so. The stereo widening effect sounds like a phaser, with the modulation waveforms of its left and right channels out of phase with each other. Judging by the comb-filtering on the sibilants (such as that on ‘sip’ at 1:32), I’d probably start off with something like a 5Hz modulation rate, a low modulation depth, and just a touch of feedback level. This track would probably also serve for “it’s The Cataracs” at 0:08 (with an automation ride of the phaser level) and the double-track on ‘down low’ at 0:24.

Speaking of double-tracks, you’d certainly need at least one pretty crispily EQ’d channel pair with opposed L/R panning for the double tracks in the second section of each verse and also for the “drop it to the floor” section, which arrives at 1:08. If fading those up close to the lead vocal in the verses doesn’t provide enough stereo smoothness, I’d try stereo chorusing and/or a short, low pre-delay, early-reflections treatment. Double-tracking would also be part of the recipe for the Cataracs rap at 0:43 and 1:43, although it sounds like there’s some light flanging going on too, and at 0:51 you’d have to match the double-track very closely to the lead in terms of level, timing, and tuning to make the “boom boom pow” line that phasey-sounding.

There’s plenty of pitch-corrector abuse, and I’d dedicate at least one track to hyper-fast correction to generate the “one, two, three” backing vocals at 0:27, “thirstay” at 1:33, and the Black Eyed Peas references in the Cataracs rap. Assuming I were working with Antares Auto-Tune, I’d use the automatic correction mode with the ‘Target Notes Via MIDI’ mode enabled, Keyboard Mode on Momentary, Tracking at 100 (‘Relaxed’), and Retune Speed at 0 (‘Fast’). After that I’d faff around on a MIDI keyboard during playback until I chanced on something that seemed to work, as there’s no substitute for trial and error with unstable effects like this. Firm pitch-correction would also be important to give the “drop it to the floor” vocals that glassy sheen, albeit with more moderate settings to avoid obvious glitchiness. For the synth-like effects of ‘bass down low’ at 0:16 and ‘I’ll make you shout’ at 0:46, I’d use a vocoder. For the former phrase I’d vocode a synth chord, and for the latter a single note in unison with the force-tuned ‘robot’ lead vocal. In both cases, rich saw or pulse waveforms would be my first call for the vocoder’s synth input, and even then I might emphasise the HF of the signal feeding the vocoder’s voice input to get maximum sizzle out of the filter bank. As with amp simulation, vocoding may be more controllable and intelligible when mixed in alongside the clean track.

Delays are all over this production. Some are occasional ‘spins’ like on “going home” at 0:35 (a crusty, eighth-note patch with medium feedback and heavy filtering) and on the phrase-endings of the Cataracs rap (a clearer, quarter-note single-tap panned to the right). Others form more of a general section backdrop, as in the case of the thin-sounding ducked quarter-note on “question for you…” (2:42), and the more high-feedback reverberant quarter-note on the double-tracked “la la la…” (2:51). Further spot effects that caught my ear were the simulated tape/vinyl-stop on the “drop it to the floor” vocals at 1:12, the static, medium-resonance, low-pass filter on “fly” at 2:47, and what sounds like a vinyl sample of the word “bass” from 2:25 onwards. You could simulate the last of these using Izotope’s freeware Vinyl plug-in, but the scratching effects might require more specialised tools like Serato’s Scratch, or a hardware DJ turntable.

If this sounds like a lot of work, it should: I wouldn’t be surprised to find that considerably more time was spent on recording, comping, processing and mixing the vocals on this record than on all the other aspects put together. That’s the name of the game if you want to compete on these terms.

This is such an inventive arrangement – almost hyperactively so, in fact! The way the vocal texture is changing constantly (in terms of vocalist, sung/rapped delivery, register, effects, stereo imaging/width) should be clear from the main review, but the rest of the arrangement is also twisting the whole time with parts being dropped out and combined in different ways so that each part keeps being drawn to the listener’s attention afresh. Just to illustrate this, check out the main hi-hat and snare parts, for example. Both of them feature a lot less regularly than you hear in most productions, but their slightly sporadic nature is very much part of their appeal to me. Hands up if you’d have instinctively unmuted the hi-hat at 0:52, rather than waiting until 1:00? I probably would have, but the production would likely have been weaker for it – as it stands, the lack of hi-hat pulls you more into the first part of the vocal hook, and then provides some additional interest where the editing becomes more repetitive. I also love the robotic snare part at 0:27, which keeps the rhythmic framework of the track solid, despite the main kick dropping out of the balance for that little section.

The starkness of many of the arrangement devices in this production does make me scratch my head a little about some of the exposed vocal sections, though. Take the one at 3:08, for instance, where it seems a bit out of character that the vocal isn’t presented completely solo, as that would have demanded even more of the listener’s attention, and made the contrast with the full backing track re-entry at 3:12 more extreme. I wonder whether Dev’s main rapped vocals were recorded to a prototype backing track which was missing some of the arrangement drops, and therefore whether the ghosted-in synth and beat in the background at this point are actually headphone spill? It’s just a guess, but it would provide one explanation for that vocal section never appearing on its own.