Bat Out Of Hell 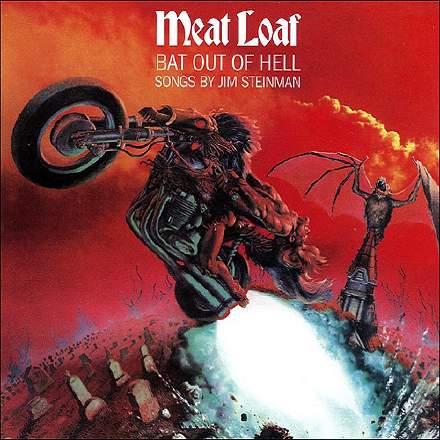 I’ve already covered one of Jim Steinman’s classic productions in The Mix Review: Bonnie Tyler’s 'Total Eclipse Of The Heart'. Following his recent death, however, I figured it was time to look back at this track, from Meat Loaf’s eponymous operatic rock opus. And what a piece of work it is! Yet despite its one-of-a-kind qualities I found myself pondering a number of unusual parallels with other records.

For instance, it actually brought to mind The Beach Boys' 'Good Vibrations' (bear with me here…), but not because of musical similarities. It’s because many musicians claim ‘Good Vibrations’ as an influence, but lots of its pioneering musical features still remain underused today – and I think the same can be said with ‘Bat Out Of Hell’. Consider the extensive use of tempo variation, for example. Not only do we have musical sections in a variety of different tempos, but the acceleration and deceleration between them is often used to great effect, such as the dramatic rallentandos before the line “then like a sinner” (at 3:20 and 5:45), and the build-ups through the line “like a bat out of hell” (at 8:10 and 8:47). And if you examine the tempo map more closely, you’ll also notice that later iterations of many sections are subtly faster – compare the verses at 1:55 and 3:38, the prechoruses at 2:26 and 4:53, or the choruses at 2:56 and 5:22, and you’ll see what I mean.

The structure is also pretty wild, with five-bar sections all over the place, for example in the verse at 2:06-2:13, the prechorus at 2:37-2:44, and the chorus at 3:13-3:21. As such, this song actually provides some good case-studies for song-writing students in how to create phrase-extensions. In some cases, Steinman simply shoe-horns in an extra instrumental riff (for example with the scalar piano fills at 2:12 and 2:43 or the bass at 4:11), whereas at 3:20 and 5:45 it’s the “and like a” vocal anacrusis that adds the extra bar. Repeated melodic motifs are another stock technique, from the subtle single melodic repetition of “swear I saw a young boy down in the gutter” at 2:16, to the three two-bar sections of “gotta be damned, you know I wanna be damned” at 4:22 and the three one-bar “dancing through the night” chunks that follow them. And while I’m mentioning that whole middle section from 4:03-4:37, notice that it’s a 24-bar section that forgoes the neat 6x4-bar pattern that so many writers might have given it, opting instead for a defiantly non-standard 4+5+4+6+3+2.

Now ‘Good Vibrations’ wasn’t the only production that came to mind in relation to ‘Bat Out Of Hell’, because the connection with musical theatre here feels very strong to me, especially with something like the musical Grease – those aforementioned triple repetitions in the mid-section somehow bring to mind ‘Greased Lightning’ more than anything heavy rock. And Meat Loaf’s urgently pulsing vibrato (check out “and wherever you are and wherever you go” at 2:31 or “before the gates of heaven” at 3:23) and histrionic phrase endings (“damned” at 4:18, say, or “flying away” at 8:18) feel more akin to Colm Wilkinson’s gale-force emoting on the original cast recording of Les Miserables than to most rock singers somehow. It’s no surprise, I suppose, as both Jim Steinman and Meat Loaf had deep roots in musical theatre – the latter appearing in the original cast of both Hair and The Rocky Horror Show.

Another incongruous connection with ‘Bat Out Of Hell’ for me is Kelly Clarkson’s 'Stronger (What Doesn't Kill You)'. Let me explain… To be honest, leaving aside the undeniable songwriting and arrangement riches in ‘Bat Out Of Hell’ (don’t miss the lovely flanger at 5:21!), I’m not sure I really like the record’s overall sonics very much. Bear in mind that it hails from the same year as Fleetwood Mac’s Rumours, Steeley Dan’s Aja, and The Bee Gee’s Saturday Night Fever, and in that kind of company it seems rather woolly and congested, without much power in the kick or bass. It also gets unappeallingly raucous in the midrange during higher-energy sections such as the choruses. However, once you switch to a small AM radio speaker, the sonics all make a whole lot more sense, which is where I see the commonality with ‘Stronger’ – it sounds like a record mixed to impress the mass-market listener, not the audiophile, and that’s the context where it really shines for me. Even with that in mind, though, I wish they’d multed Meat Loaf to a different channel for the first prechorus (2:26-2:54), as I think he’d have come across better with less low end and more midrange in that vocal register.