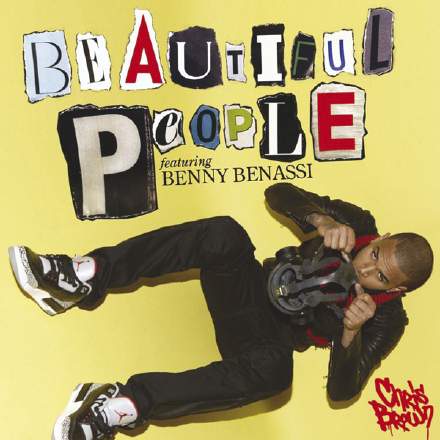 It used to be that the classic dance-style delay patch was the 3/16 — in-tempo, but nonetheless syncopated, creating lots of complex, skittering repeats for even the most four-square synth line without undermining the underlying metronomic pulse. However, where the 3/16 rhythmic grouping permeates the actual synth/vocal lines themselves, as in this Chris Brown single (and many other club tracks at the moment), the simple eighth-note delay can take on the same ‘press this button for more rhythmic interest’ role instead. In this particular case, though, I suspect there’s a 3/16 delay patch happening too, even though you can’t hear it most of the time, because its echoes are being masked under each new riff note. The reason I think it’s there is because the 11th note of the riff (at around 0:04) only has an eighth-note duration, which means you can hear one little 3/16 repeat pop through just after the 12th note of the riff. This is the kind of clue that I’m always on the lookout for. It suggests that there’s a 3/16 send effect contributing to the sound of this mix in a ‘stealth’ capacity, even though it’s not really audible in its own right anywhere else in the track, as far as I can see.

The Sides signal of this mix is worth a listen too. The first thing to notice is how little low end there is in it, because both the kick and the bass are totally mono — something that the mix engineer here, Serban Ghenea, seems to do more frequently than some. But the other thing to pay attention to is the heavy compression gain-pumping effect. Although the simplest way to achieve this kind of effect is just to turn the kick up loud in the balance and hammer the whole mix into a buss compressor, that’s clearly not what’s happened here, because the pumping is primarily affecting the big, fizzy synth sound much more than it is the little arpeggiated synth line, or the lead vocal delay/reverb effects tails. The advantage of applying the pumping effect more selectively like this is that you can exaggerate it as much as you want (to give that subjective ‘the kick’s so loud that my ears are almost imploding’ illusion) without any danger of losing vocal intelligibility. This is particularly important in this song, because Chris Brown’s vocal follows the rhythm of the bass riff a lot of the time, so if the pumping were affecting the whole mix, many of his words would have their front consonants ducked. Clearly, some classic dance tracks have made a virtue of this kind of effect (Stardust’s classic ‘Music Sounds Better With You’ springs to mind), but from a pop-crossover perspective, anything that compromises clean transmission of the lyrics is always going to be considered something of a gamble.