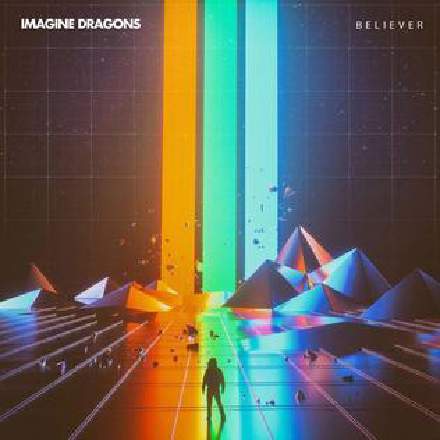 If you want to wrong-foot the listener to highlight the onset of a song’s chorus, but your main hook/melody happens to start only on the chorus’s first backbeat, then one tried-and-trusted arrangement method is to create a kind of arrangement ‘suckout’ on the downbeat, allowing the full texture to explode into existence on beat two. This is most often used as a one-off device, perhaps to add that extra bit of spice to the final choruses after a middle-section build-up, but this Imagine Dragons number rides it till the wheels fall off!

The first specimen appears at the head of chorus one, the downbeat stripped down to its solo bass synth (a gloriously grubby-sounding one!) before reinflating into the backbeat’s mob-vocal “Pain!”. But it substitutes a full-texture variant with distorted guitar two bars later, when I’d half expected it to repeat verbatim, as well as suddenly reappearing following new thematic material at 1:09. So the resulting A-A'-B-A structure effectively extracts three attention-grabbing moments from a single ‘sit up and take notice’ arrangement stunt.

It gets better. Since the second chorus is cast from the same mould, it creates a sense of inevitability about the approach to chorus three and the producers capitalise on that expectation to refresh both the suckout moments. The first replaces the bass drop with an extended taiko swell first heard during the build-up to chorus two (1:53), transplanting that from its original beat-three location to the downbeat, slyly generating a flavour of bar-extension/contraction without actually deviating from the meter. But the second instance trumps them all by muting everything but the vocal reverb tail.

What’s also unusual about this production is the extensive use of transition effects to connect and add momentum between the basic groove’s ponderous main beats. Pitch-bend transitions are many and varied, for example: there’s not just that signature bass drop and its rising-pitch guitar substitution, but also the shift between downwards and upwards pitch inflections on “Pain!” during the different chorus sub-sections. There’s plenty of ‘velocity ramping’ too, most obviously in the Taiko-style fills that are baked into the basic groove, and which (as I already mentioned) so effectively flag the second and final choruses from different metric standpoints. Extended reverse-envelope effects can be heard on the final backbeat before choruses one and two, while a shorter one returns us to the full texture following that final dramatic suckout at 3:12. Furthermore, these different transition effects are frequently chained for added impact. Check out the quintuple-whammy going into the second chorus from 1:53: two different taiko velocity ramps lead into both the third and four beats of the bar preceding the chorus; a reverse-envelope transition effect propels us into the downbeat; and then the pitch-drops of the bass-drop suckout and its following “Pain!” carry us right on to beat three.

Whatever the band paid their production team, it wasn’t enough!