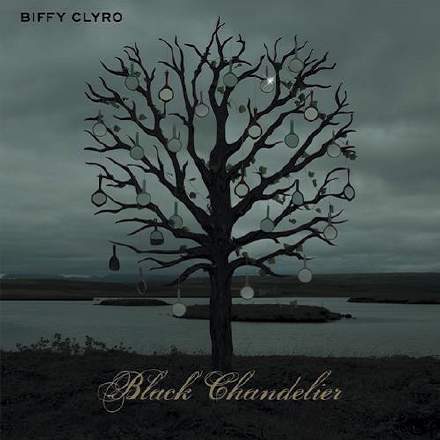 The drum sound in the first verse of this song is an odd one for any rock band to go for these days, and I’m not really convinced by it. The individual components of the drum kit don’t sound like they’re connected to each other, almost as if they were overdubbed one at a time. This is common on home brew band recordings, where people have relied too heavily on close-miking, because it’s the overheads and room mics which typically provide the realism and ‘glue’ that binds the instruments together believably, and I suspect that faded-down drum-room channels are part of what fuels my misgivings with ‘Black Chandelier’. It also bugs me that, acoustically speaking, the kick, snare, and hi-hat seem to occupy different universes. It’s not just that the super-dry kick seems odd next to a snare with such heavy short-decay ambience; many classic rock mixes have a similar mismatch, and most listeners are quite used to that kind of studio sound. It’s less easy to overlook the way the dense and somehow constricted snare room doesn’t sit particularly well with the wider and seemingly airier reflections around the hi-hat (the result of introducing a triggered snare sample perhaps?), and it’s always going to sound a little unnatural panning your hi-hat well away from the snare, especially when the hi-hat’s on the right, implying an audience-perspective viewpoint that yields precious little stereo separation in the real world.

I’m not suggesting that a drum kit should always sound realistic, because there are lots of great records which don’t even pay lip service to acoustic realism. My problem is that the drum sound isn’t far enough away from the generally roomier and more cohesive sound that Andy Wallace established across the band’s previous couple of records, which means that its artificiality sounds like a shortcoming, rather than a creative decision to pursue a new sonic avenue (if that’s what it was). I think the starkly separated sound does Biffy Clyro few favours stylistically, by shifting them more towards a sanitised pop/rock confection which doesn’t jibe that well with their lyrical content. Sure, the drum sound gets well back onto familiar territory elsewhere in the song, but I couldn’t quite get the taste of that first verse out of my mouth!

On a more positive note, the lead-up to the last chorus contains a couple of gems. I love the vocal effect at 3:07-3:18, which sounds to me like a combination of light ring-modulation on the lead line and an understated whispered double-track, treated with some kind of stereo-widening effect. It’s also been mixed just at that level where you’re not quite sure what’s going on, which makes it pleasantly unsettling. My second highlight is the arrangement drop at 3:20, using the middle-section guitar tone from 3:07-3:14 to sucker you into the mistaken belief that there’s another section before the full forces return — at least until everything thunders in on the off-beat a moment later. Gotcha!