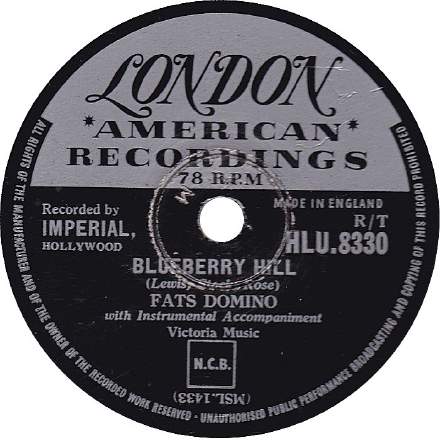 Perhaps overexposure to Mix Rescue submissions has made me too picky, but I can’t help being distracted by some of this production’s technical foibles. The tuning is occasionally pretty wince-worthy, partly because most of Fats Domino’s low B notes are sharp (it sounds like the choice of key has put them uncomfortably low in his range) and partly because of the horn section’s tendency to drift sharp, especially in the fills following the lines “the wind in the willow played/love’s sweet melody”.

What seems like a clunky edit in the middle of the first syllable of “Blueberry” at around 1:32 niggles me too, adding an unnatural gargle to the hook line. There used to be worse edits in there, though, because early pressings featured a heinous tape-speed warble after “sweet melody” around 1:02. Someone was clearly napping in the mastering room when that one went down… That said, apparently there was never any full take of this song recorded, and it’s thanks to the mastering engineer’s tape-splicing skills that it was ever released at all, so we can’t be too hard on him!

And, on the plus side, the re-editing done after those initial pressings also gives us a little insight into the quality of tape-to-tape transfers in that era. You see, Fats flubbed one of the lyrics by singing “vows we made” rather than “vows you made” first time around, so during the re-edit that line was replaced with its recap from later in the song. Comparing the two instances, the differences are pretty subtle, it has to be said, and you can see why such techniques could be used with impunity.

I do wonder, though, which of those sections is the copy, and which the original. Obviously it would have made most efficient use of time to use the second-generation tape for the earlier section (where the mistake needed to be patched), but funnily enough the audio in the re-edit actually sounds lower-bandwidth during the latter section. So was the source tape for that section actually moved to the earlier position and then the copy placed into the gap? If so, it wouldn’t be without justification, in terms of having the higher-quality audio appearing where the listener would form their first impression of the line. It’s a bit like that age-old catering technique (as documented in St John’s biblical account of the marriage at Cana), where the good wine’s brought out for first impressions and the cheaper plonk’s saved for later on.