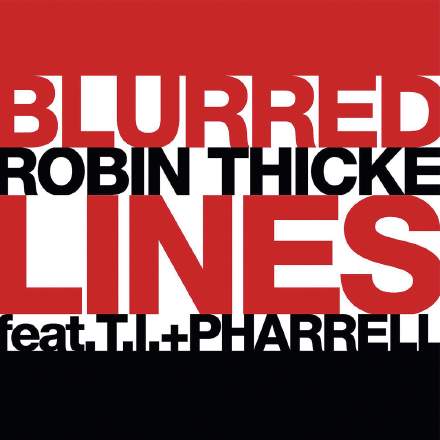 This production demonstrates how important vocal performance and arrangement are to modern pop hits — because there’s precious little else to it! Indeed, the basic eight-bar backing loop is so simple (varied only on a handful of occasions by muting a few parts), that it wouldn’t surprise me at all if it’d been put together in the iMPC app during a cigarette break. As such, I have the greatest respect for what Thicke and co-conspirator Pharrell Williams have achieved here.

Take the chorus, for instance. Although ostensibly the baldest of one-note ideas, the “good girl”/“blurred lines” declamations are transformed into killer hooks simply by virtue of expressive glissandos, while the “you know you want it” is made significantly more arresting by dropping its second iteration an octave. On the face of it, these are such primitive devices, but — let’s be frank — how few of us would actually have used them in the situation? In general, the range of vocal stylings is dazzling, with the arrangement revealing different facets at a frenetic rate. Listen to verse two, for example: Thicke starts off with a breathy double-tracked falsetto for “what do they make dreams for” at 1:22. Six seconds later “you the hottest” kicks in with a forceful, bluesy, layered chord extending up to a soprano ‘D’, before 1:30 gives us a more conversational solo delivery in his middle register, accompanied by wide-panned “hey hey hey” layers that are just out of tune enough to sound fashionably stoned. By 1:38, Thicke’s moved a little further up his register and is moving into a more clearly sung style, while sporadic gale-force harmonies are added over the top, and then a return to the “hey hey hey” texture at 1:46 (with an added “uh-huh” idea) brings us to the chorus. That’s already an enormous amount of variety in one verse, even before you start considering all the wonderful little details: the amusement in his voice on “what rhymes with hug me?” (1:34); the cascading R&B ad libs at 1:36 and 1:55; the wild pitch sweep of “domesticate you” (1:40); and Pharrell’s repeating “everybody get up” and Jackson-esque “wooh” contributions.

Another question to ask is this: how much of this arrangement would have been murdered had anyone tried to iron it out with pitch-correction software? While it’d probably be rather naïve to suggest that tuning gizmos played no part in this production (it’s pop after all) I never get a sense that I’m hearing that technology, just great performances. And it’s not just the “hey hey hey” riff that showcases how technically out-of-tune moments can enhance the swaggering attitude, because the main hook is also far from pure. Who the hell cares when it sounds like that much fun?