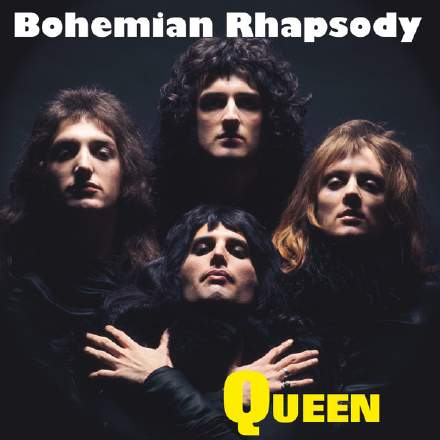 Is there honestly anything left to say about one of the most over-analysed productions in the history of rock music? (Check out this, for instance, if you dare…) Notwithstanding, it seems to me that most of the column inches this song has generated have been marvelling at its many startling and unusual features. Whereas what actually interests me most from a production perspective is how the hell Roy Thomas Baker and the band managed to bind a bunch of such contrasting episodes into a musically satisfying whole.

Fragments of chromatic scales are a pervasive feature of the whole song as well, most memorably in the oscillating piano riffs at 1:44, 3:32, and 5:42 (and, to my mind, underpinning “me” at 5:26 in elongated form too), although there’s also the rising chromatic F-Gb-G-G#-A melody of “thunderbolts and lightning, very very frightening me”, which helps make sense of that breakneck Db-Ab-C-E-A harmonic progression. But for me it’s in the bass that the chromatic motion makes the biggest impact, with the C-B-Bb-A-Ab-G line underpinning the Cm-F progressions at 1:15 (now I’ve gone and thrown it all away") and 2:15 (“leave you all behind and face the truth”), and the F-E-Eb-D line below the F chords at 1:29, 2:28, 2:42, and 2:55. The last of those instances is especially interesting, because it extends the scale to F-E-Eb-D-Db-C-Cb-Bb-A, thereby providing melodic logic to the stark Fm-Db-A harmonic transition that leads into the operatic section. And using the chromatic scale to make sense of an angular harmonic progression like this isn’t the only similarity with “thunderbolts and lightning…” either, because those two chord patterns also share an unusual major-third root sequence, the former falling F-Db-A and the latter rising Ab-C-E.

Another harmonic manoeuvre that links the operatic section with the rest of the song is when the section “let me go, no, no, no, no, no, no, no” (3:49) features a F#-Bm-A-D-Db-Gb progression that’s subsequently echoed a semitone higher ( G-Cm-Bb-Eb-D-Gm) during one of my own personal favourite moments at 5:10, heralded by the “ooh yeah” backing vocals. Indeed, I’d suggest that part of the sense of closure that the whole 4:54-5:26 section provides derives from its synthesis of the verse’s pervasive I-vi-ii-V progression and characteristic flattened subdominant chord moment (at 1:41 under “nothing really matters”) with the opera section’s “no, no, no…” progression and repeated “Scaramouche”/“Bismillah” harmonic oscillations – the latter concept manifesting for me as G-Cm-G-Cm under the “ooh yeah” BVs at 5:00 and Gm-Cm-Gm-Cm under “nothing really matters, anyone can see” at 5:11.

And speaking of the verse’s I-vi-ii-V harmonic patterns, it’s clear than falling-fifths root progressions in general constitute another musical connection with the operatic section, although there scorning the same orderly cycle-of-fifths patterns we see in the verses. So not only does “let me go, no, no, no, no, no, no, no” (3:49) feature a dislocated series of falling fifths ( F#-B; A-D; Db-Gb; Bb-Ab), but it’s also quickly followed by a Bb-Eb-Ab-D-Gm cycle of fifths under “Beelzebub has a devil put aside,” made ‘crooked’ by the diminished fifth between Ab and D.

But what does all this muso navel-gazing mean in practical terms? Well, as I see it, the only decent reason I can muster for analysing music at all is that it can reveal new tools for your own music-making. And in this case, the main takeaway for me is that you can usefully bolster the musical cohesion of musically wide-ranging productions by cross-pollinating elements of lyrical, melodic, and harmonic material between their contrasting sections. Oh, and that you can write a hit song that modulates – at least five times in this case, with a Bb-Eb modulation actually built into the main verse section!