by Sam And The Womp 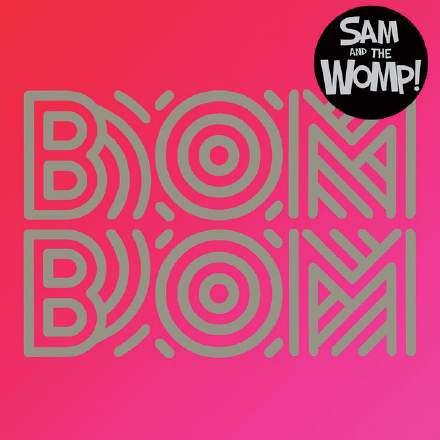 The vocal absolutely makes this record for me — a fantastic and uninhibited performance from vocalist Bloem de Ligny. It’s tough making any rap expressive and characterful enough to arrest the listener’s attention in its own right, which is why bland and monotonous delivery is the scourge of second-rate hip-hop. It’s thus instructive to examine how this lead line pushes towards the other extreme, hamming things up to a point well outside the expressive range of normal speech. I particularly like the way she takes advantage of the pitch range of her voice. For a small-scale example, take the first instance of “bom bom bom” at 0:14, where you get three distinct onset pitches, the third with a pronounced up-down sweep. Imagine how much less effective this would have been had Bloem simply marked the rhythm and kept the pitch the same. Zooming out a bit to look at that whole first verse, check out the way she shifts register to differentiate her different phrases, too: upwards for “how charming” (0:19), “ooh ah ah” (0:29), and the final “bom bom bom” (0:41); and downwards for “what’s grooving” (0:15) and “pints of rum” (0:24). The way she modulates the force of her delivery, between the exaggerated breathiness of “what’s grooving” and the forced Björk-alike growl of “rum”, is also great.

Something else that caught my ear was the super-bright reverb on the brass, which is laid bare for inspection during the solo section at 1:17. You wouldn’t often dial up a patch like this out of choice, but it’s perfect here, emphasising the upper frequencies of the brass (and, indeed, the mix as a whole), but at the same time sounding so unnatural that it doesn’t really push the brass backwards in the mix’s depth perspective at all. The hard L-R panning of the brass layers undermines the blending effect of the reverb too, by placing the dry sound at the edge of the simulated acoustic, rather than within it.

The hard-panning of the brass does also give a pretty hefty loss in mono, which I’m always cagey about doing myself. However, the upsides are that it doesn’t get phasey in mono, and anyone on either one of a pair of earbuds still gets a reasonable balance. And speaking of mono, there appears to be a bit of a phase mismatch between the left and right channels of this mix below 100Hz on the big bass patch (0:42-1:16 and at 2:10-2:50), but fortunately it’s mostly fairly restrained, so in practice doesn’t undermine mono balance much. The odd very out-of-phase fill note (such as at 1:05, 2:18, and 2:27) isn’t too much of a disaster either, because you could almost consider those moments of wideness as spot effects.