'Bridge Of Death' from Chernobyl 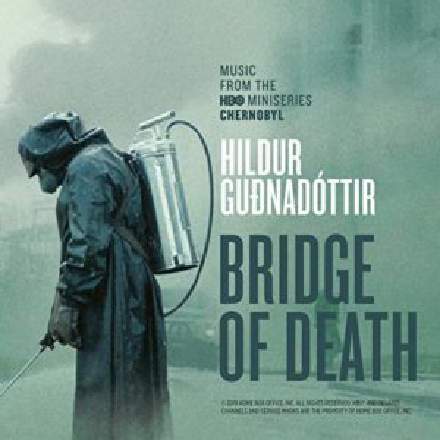 It’s been a big year for Hildur Guðnadóttir, who recently won an Oscar for scoring the widely lauded film Joker. (Incidentally, if you’re wondering how to pronounce her name, here’s Wikipedia’s take on it: play_arrow | get_app) At the 2020 Grammies, however, it was her work on HBO’s harrowing Chernobyl miniseries that won her the Best Score award. And this particular cue from that soundtrack stood out for me, underscoring a scene in which residents of Pripyat, the town closest to the power station, flock to a local bridge to admire the ethereal glow of the damaged reactor’s ionisation aura, unaware that they’re exposing themselves to lethal radiation that will cost them their lives. For a composer, a scene like this is an extraordinarily difficult brief, because of the contrasting emotions involved: the awe with which whole families are gathering together to view the dramatic visual spectacle; and our own horrified anticipation of the disaster’s insidiously murderous after-effects.

One big way I think Guðnadóttir communicates these conflicting emotions is by using a kind of ‘staggered’ harmony. You see, although the whole cue pretty much follows the same ponderous repeating Em-F#m-G chord progression, the harmonic voices don’t synchronise very well. For instance, the first ‘bass’ note arrives around 0:19, above which a G chord solidifies momentarily at 0:22, before the bass moves to E at 0:24, leaving the high metallic D trailing a little behind it as a seventh, only falling down to B a second later. Then at 0:28, the mid-register B moves to C# a couple of seconds before the bass makes its own move to F#, and the high B only settles the harmony by reaching C# a second after that. This same kind of approach continues throughout the cue, and is further complicated by the subtly pervasive dissonant F first heard around 0:38. What I think’s so successful about all this is that it presents the listener with fleeting moments of wonderfully sonorous consonance, but most of the time the texture is clouded to some degree by those smeared chord transitions. The smearing rarely crosses the line into jarring dissonance (all the chord notes belong to the same E Dorian scale, after all), but it just infuses the music with a palpable unease.

Of course the sound-design is a big factor here too, especially the way in which the line between mechanical and organic sounds is blurred: the slowly pulsating bass sound that evokes not only gargantuan thrumming transformers, but also low church organ stops; the seamless interweaving of wailing metal-stress tones with wordless vocals; the distorted mechanical timbres that begin coming to the fore later in the cue, merging into the funereal brass swell at 3:07. Taken within the heavily reverberant mix context, these construct a kind of brutalist sonic cathedral, compositing inhuman timbres into a sinister, yet hauntingly beautiful, parody of human devotional music.

Now, I can imagine a dozen ways this scene might have been scored, but I don’t think I’d ever have dreamt up anything like this. Yet in retrospect Guðnadóttir’s approach feels like the obvious choice – how could this scene have been as meaningful with anything else? It takes a special blend of musical mastery and intuition to pull that off.