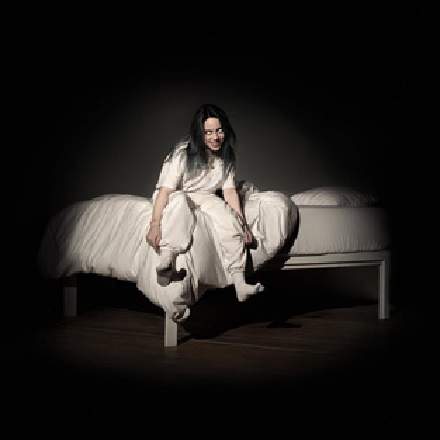 It was more than 20 years ago, but I still vividly remember walking into my local HMV and being stopped in my tracks by the sound of Fiona Apple’s debut single ‘Sleep To Dream’ coming over the speakers. Since that occasion, no record has demanded quite such immediate attention from me and my wallet, and I’d assumed that was just to do with me becoming a jaded pensioner-in-waiting. But then I heard this single from Billie Eilish, and within five seconds the credit card was skipping from my pocket like a spring lamb! Honestly, I haven’t heard such a fabulously arresting piece of new chart music for ages.

The vocal production is mind-boggling in the variety of vocal deliveries, as well as various cool spot-effects and layers. It’s so densely detailed and inventive that it’s hard to know what to single out for praise, but personal highlights include the spoken double-tracks at 0:30-0:40 and 1:34-1:44, which progressively increase in intensity; the many claustrophobically dry spoken phrases, such as “come here” (0:24) and “I wanna end me” (0:55); the backing vocals at 0:43, which are then reversed at 0:47; the ominous rattle in the male vocal timbre on “dead by now” (1:50), as well as the purring chorused female “wow” that follows it; and the subtle pitch-dropped layers under “what is it exactly” (0:27) and “what had you expected” (1:31).

Another thing that slays me is how well the rest of the production supports the vocal creepiness. The Foley and atmospheric effects are particularly rich, favourites of mine being the spooky door-hinge squeak at 1:53 and the unnerving dentist-drill whirr at 1:55. Is that a blade swishing through the air at 0:47? Cybernetic rats skittering across the stereo image at 1:05? Some hideous alien tearing through rusty metal at 1:48? A paranoid ringing in our ears at 0:55? The sound-design is so beautifully targeted, fastidiously nuanced, and restlessly mixed that the song comes across as much like a teaser-trailer to some kind of horror-game franchise as it does like a chart single — and I mean that as a compliment, given the extraordinarily high production values you’ll frequently find in that part of the audio industry.

But, above all, the sheer bravado of the producers is breathtaking. At 0:57, for example, they deliver possibly the boldest six seconds of production I’ve ever heard in the charts. That silence between the two low-frequency tones seems like it goes on for ever! In fact, the way pockets of stasis are repeatedly used to generate unease is brilliant, much like those momentary breathless pauses that precede many a cinematic jump scare. In this respect, it’s particularly cool that the very last phrase of the song “where do we go” (3:01) trails to silence just as it did at 0:21 and 1:25, leaving you unsure whether the song’s actually finished, or whether another of those menacingly up-close male vocal phrases is still waiting to pounce…

Overall, despite the lyric’s slightly worrying undertones of glamorising self-harm, I can’t recommend this production highly enough to any student of modern production. The more you listen, the more you’ll find to appreciate, which is pretty much the definition of great art, as far as I’m concerned. Not to be missed.