by The Bay City Rollers 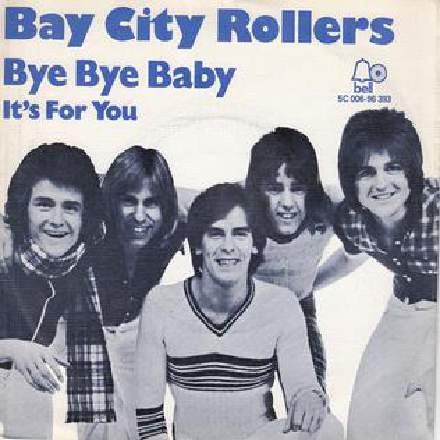 For any given key in tonal music, there will be some other keys that are more closely related, and some that feel more remote. Broadly speaking, the perceived distance between keys reflects the similarity of their scales: the more scale notes the two keys share, the closer they’ll feel harmonically, and the easier it’ll typically be to modulate smoothly between them. Or, to put it another way, keys which have similar numbers or sharps or flats in their key signatures will feel more closely related than keys which don’t.

For example, G major has one sharp in its key signature, which means that its most closely related keys will be E minor (also with one sharp), C major and A minor (both having no sharps) and D major and B minor (two sharps each). One step further away, you’d find F major and D minor (one flat) and A major and F# minor (three sharps). And if you looked through all the modulations used in the charts during the last century, you’d find that the lion’s share of them involve movements no more remote than these. And it’s no accident that those songs which really stick in the mind for their modulations are often the ones that stray outside that safe zone – think Toni Braxton’s 'Un-break My Heart' or Celine Dion’s 'My Heart Will Go On', for instance.

Which makes it a bit of a head-scratcher that this frothy pop song, arguably The Bay City Rollers' signature number, has such a jarring juxtaposition between the verse’s G major tonal centre and the E major of the choruses – a shift between key signatures with one sharp and four sharps respectively. I say ‘juxtaposition’ rather than ‘modulation’ too, because there’s precious little setup at all for the key change in either direction. It’s pretty much just ‘wham, bam, thank you ma’am’, as if sections of two separate songs had been just sliced together. Indeed, it’s a fun exercise to play around with your DAW’s pitch-shifting and imagine how the song might have sounded without the key-change at all… play_arrow | get_app And, indeed, once you realise how conventional the verse and chorus progressions essentially are otherwise ( I-IV-I-V-I-IV and I-ii-V-I-ii-V respectively), it shouldn’t escape you that this simple modulation technique presents an enormous untapped songwriting resource in terms of breathing new life into other simple harmonic progressions.

Now, in a sense, you could disparage this kind of unprepared modulation as the same brand of empty theatrics as the much-maligned ‘shift everything up a step for the final chorus’ cliché – and, indeed, at first glance it might seem that The Bay City Rollers have flogged that dead horse too when the final choruses arrive at 2:09! However, closer inspection reveals that it’s a minor-third rise, not a whole or half step. In other words, we end the song in G major, which brings the song full circle. Not only do we end the song in the key it began, but we also present the chorus material (thus far always heard in E major) in that key, which provides a powerful indicator of musical closure. (A similar principle underlies the classical ‘sonata form’, for example, where a first theme in the home key and a second theme in a different key are eventually reconciled and both then recapitulated in the home key.)

Harmonic theory aside, a few features of the backing track stuck out for me. For a start, have you ever heard a thinner guitar sound than the one that first appears 0:15? He might as well be playing an electric guitar that they’ve miked up acoustically (rather than plugging it into an amplifier). Honestly, for most of the song you’d be forgiven for mistaking it for a backbeat tambourine! And check out the hemiola rhythms the piano’s playing for most of the song, which I think are crucial to the characteristic energy of the rhythm section overall.

I had to laugh about the tubular bells during the song’s intro, because if you scan Youtube for the band’s television appearances of the period, you’ll see drummer Derek Longmuir gamely hitting his cymbals on cue, even though what you’re hearing is the tubular bells. Not that it’s any more incongruous than the prominent piano part in the intro, in contrast to the total lack of piano in the band line-up. I imagine they hoped the camera would be close up on the singer most of the time…