by The Everly Brothers 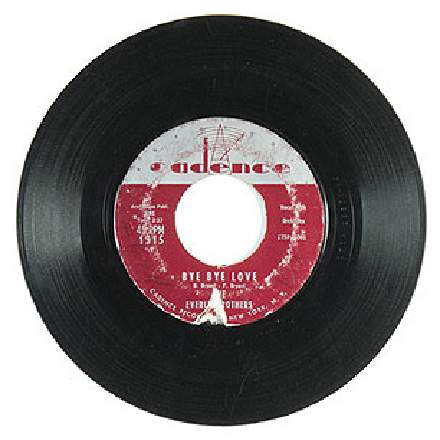 There’s something wonderful about the efficiency and effortless poise of this record, an ideal combination of the two brothers' voices, Don Everly’s guitar, and members of The Nashville A-Team on drums, bass, and rhythm guitar. Everything seems like it’s exactly where it should be in the balance and depth perspective, which is quite a trick given that this record was (according to this article) recorded direct to mono using four mics: the brothers shared a mic (as they were used to doing live), the bass and rhythm guitar shared another, and the drummer and lead guitar each had their own.

Presumably Phil Everly positioned himself a little further from the shared vocal mic, and I’d not be surprised if he’d also angled himself slightly away too, as his voice seems a touch less present and more ambient by comparison with Don’s lead. And I suspect that the upfront brightness of Don’s vocal may partly be on account of a mic position below his lip level (where a singer’s high-frequencies are often more prominent as they bounce off the soft palate), which would have made sense as a means to capture sufficient guitar level – a win-win proposition from a mix perspective.

Then there’s the bass, which is beautifully played and captured to deliver an impressively consistent warmth and sustain. (Admittedly, the low frequencies on records of this era generally seem rather lightweight to modern ears, so if you’re having trouble appreciating the quality of the capture here, try slapping on 12dB of low shelving EQ below about 200Hz.) The snare’s gorgeous too, and I reckon the decision to use what sounds like brushes for the snare may have been critical to that. You see, with such a simple miking arrangement, there would inevitably have been a good deal of spill between the mics, so if the snare had been too loud, the spill on all the other mics would probably have prevented the snare from sounding as tight and focused as it does here. It’s also balanced beautifully, delivering richness and sustain, along with just enough restrained punch to drive the groove.

The performance is extremely disciplined as well. The tightness of the brothers' harmonies has often been singled out for praise, but the thing that impresses me most is not how well they synchronise each new note – it’s the exactitude with which they finish notes together, in particular the way their ’s' sounds perfectly overlay on the words “happiness”, “loneliness”, “caress”, and “emptiness”. If you told me Phil had just omitted those esses entirely, I could believe it, but it honestly doesn’t sound like he did.

Another story told about this record is that Don Everly came up with the characteristic opening riff pretty much on the spot during the tracking session, basically transplanting it from an earlier song he’d demoed called ‘Give Me A Future’. If that’s true, it might provide a reason for the rhythmic untidiness of the fill after the first “bye bye love” (around 0:07), because Don might well not have had time to properly settle into the song’s main groove by that point. Certainly that fill’s already considerably tighter the second time it occurs (around 0:19), and subsequent iterations feel totally locked in.

And finally, the versions of this track I’ve heard all have an intriguing fade-out anomaly, where the final complete “bye bye my love, good bye” line seems to fade out abruptly, and is then followed by a ghostly, thin-sounding echo. Could this be print-through from one layer of the tape to the layer above it on the reel? Well, the time between the final “bye bye my love, goodbye” and its echo is about 2.7s, so if that was equivalent to a complete spool rotation at a tape speed of 15ips (inches per second), that would mean the circumference of the tape on the spool at that instant would have been just over 40 inches. Dividing that by pi gives the diameter of the tape on the spool as just under 13 inches. Given that some tape machines of that era had 14-inch reels (the Ampex 200A, for instance), the print-through hypothesis isn’t inconceivable, assuming that ‘Bye Bye Love’ was the last song on the reel.