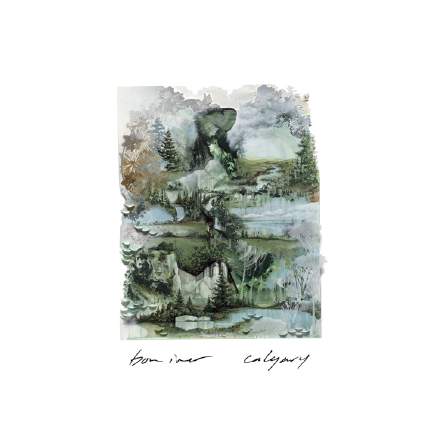 Everyone has different views as to how lead vocals should be balanced in a track, and it’s no secret that mix levels and effects treatments vary considerably from genre to genre. Nevertheless, cutting across stylistic boundaries is something of a general consensus amongst mix engineers that, if nothing else, the listener should be able to make out the song’s lyrics. One of the practical problems with judging this at mixdown, however, is that if you yourself actually know what the lyrics are supposed to be, it can make them appear much more audible to you than they will be to the average listener. So the fact that Bon Iver’s chief writer Justin Vernon shouldered some mixing duties on his latest album may go some way towards explaining why I can’t work out what the hell he’s singing about most of the time!

Take this first single, ‘Calgary’, for instance — actually one of the better tracks as far as intelligibility is concerned! Even after listening repeatedly through full-range studio monitors, two different small speakers, and a set of top-of-the-range headphones, I still managed to significantly misunderstand 17 of the 31 lines of lyrics, enough to completely destroy any hope of his subtly nuanced message reaching my consciousness intact. Some people (possibly Vernon included) may well argue that a little mystery remaining in the lyrics is no bad thing — many bands have made a slight lyrical vagueness into something of a calling card, after all. But taking that concept quite this far just seems like a shot in the foot, because I certainly come away from this record frustrated, and not because I don’t like the music.

My suspicion, though, is that Vernon and his co-mixer Brian Joseph reached this end result because they weren’t fully aware of quite how difficult it would be for other people to pick out the words. In their position, I’d certainly have asked someone with no knowledge of the song for an opinion on the issue, to defeat any bias from their own internal ‘lyric crib sheets’ when making judgements about vocal balance, and I can’t imagine that they’d have left the mix this way had they done so.

I’d also have suggested that they checked over the mix at a few different levels, because on the evidence here it probably wouldn’t be too far-fetched to speculate that the record was mixed predominately at high playback levels — not only do the words feel significantly easier to comprehend under those circumstances, but the production as a whole has the characteristic mid-range emphasis that frequently results from over-loud mixdown monitoring. A greater reliance on mono listening might have paid off for them too, because stretching the stereo field, whether by listening on headphones or by pushing your head forward beyond a speaker system’s sweet spot, is another thing that makes these wide-panned vocal layers seem clearer than they really are. Indeed, in this context it’s interesting to note that this little documentary appears to show their studio monitors spaced a little too far apart, at least as far as anyone sitting at the DAW controls is concerned.

I notice that there appears to be no mastering credit, which might account for some of the useless subsonics rolling around underneath the music. A mastering engineer might also have had a quiet word about vocal intelligibility too… Speaking of which, to put some specifics on my comment about misunderstanding half the lyrics (and also for general amusement!), here’s what I guessed the lyrics were saying before I looked at the booklet. Alongside any misinterpreted lines I’ve put the intended lyrics in brackets. Here goes:

Don’t you cherish me, to sleep

I was only for the father’s crib

Your neck onto his shoulderblades, ahhh

Cross your breasts you won’t erase

Hey, open up no fair (Hip under nothing)

Propped up by your other one,

Face away from the sun

Just have to keep up dialogues

Put you at the skin itself (Pincher with the skin inside)

So it’s storming on the lake

There’s a fire going out

Your one-piece swimmer stuck to you

Wake up to your starboard bride

That’s an awful lot to get lost in translation… and I’m still laughing like a drain at “Ping me with your blaster eyes”!