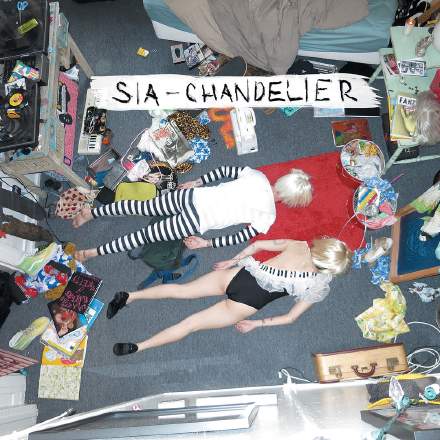 Earlier this year, I rather stuck the boot into Miley Cyrus’s 'Wrecking Ball'. (So to speak.) Despite remaining unrepentant, I’ve always preferred positive examples to negative ones, so I’m delighted to report that I think Sia’s ‘Chandelier’ makes a much better job of this kind of modern power ballad. Yes, her chorus texture also features its own variant on the ‘consonant sludge’ I criticised in ‘Wrecking Ball’, but crucially it remains hard-edged and present-sounding right to the end, without syrupy additional string layers blanding it out — the drums stay right up front, the bass/synth combination keeps its bite, and the oscillating-thirds keyboard figure (almost a mini hook) remains clearly audible.

Furthermore, Sia’s vocal is less full-sounding and placed further back in the mix, with the result that it better supports the backing track’s illusion of power — it’s perhaps no surprise to learn that the engineer here is Manny Marroquin, whose mix of Rihanna’s Umbrella’ I’d already held up as a role model (albeit in a rather different style) back in my ‘Wrecking Ball’ critique. On top of that, though, Sia’s beautifully fractured vocal tone throughout (most affecting on “fly like a bird through the night/feel my tears as they dry”) delivers real passion and emotional maturity that goes well beyond formulaic pop-diva posturing, so fundamentally I buy into what she’s singing about, where Miley Cyrus didn’t allow me to suspend disbelief.

Sia, the hairs on the back of my neck salute you!