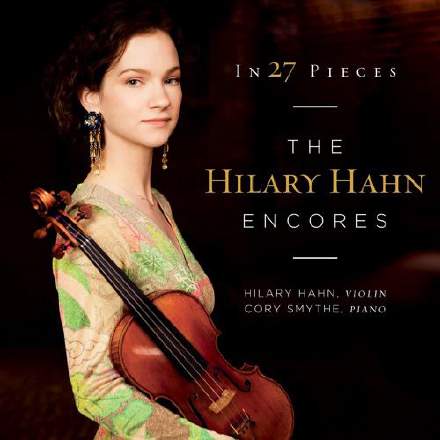 Hilary Hahn’s bravura two-CD encores collection In 27 Pieces was a worthy winner in the 2015 Grammy awards' Best Chamber Music Performance category. From a production perspective, though, the stereo presentation of the violin feels rather strange to me, as you can hear on the second disc’s opening number. Now I’m no stickler for pin-sharp stereo positioning, because I realise that:

But in this case the violin drifts around the loudspeaker panorama in such a disconcertingly erratic way that it actually distracts me from the music.

For example, although the lower notes of the virtuoso flourishes at 2:26-2:28 seem broadly clustered a little to the left of centre, both the high accented chords suddenly shoot across to the opposite side. What’s even weirder, though, is when the violin image destabilises to such an extent that it actually starts to feel like it’s emanating from both stereo extremes at once, for example during the legato line at 1:10-1:20! And then, when she’s double-stopping (ie. playing two or more notes at once), different notes within the same chord seem to be arriving from different directions, for instance during the passages at 1:30-1:35 and 1:44-1:51, or in the Dm chord at 2:47.

So what’s going on? Curiosity piqued, I did a quick web-trawl and happened upon a Youtube publicity trailer for the album containing footage of the studio setup used for the recording, which suggests some possible explanations of what I’m hearing. Two different violin spot-miking setups are visible (with condensers at 5:43 and ribbons at 6:26), both spaced stereo arrays with the mics maybe 40-50 cm apart, and roughly a metre and a half from the violin. Based on time-of-arrival stereo cues, I’d expect these setups to give acceptance angles of no more than about 90 degrees, a figure further narrowed by level-difference cues that inevitably begin impacting on the operation of spaced stereo arrays when placed so close up. Given that Hahn moves around a fair deal while playing, this would already provide one reason for her dancing image in the recorded panorama.

In addition, though, a violin’s wooden body has extremely complex frequency-dispersion characteristics, and it’s conceivable that this might on occasion have conspired with Hahn’s physical movements to generate different stereo location cues for different notes, or indeed conflicting cues for the same note — say, an earlier arrival time in the left mic, but a louder/brighter tone in the right mic. Try comparing the violin tone in the left and right stereo channels on that chord at 2:47, for instance, and you’ll hear how dramatically divergent the violin tone is, with the top D much more prominent in the right-channel stream.