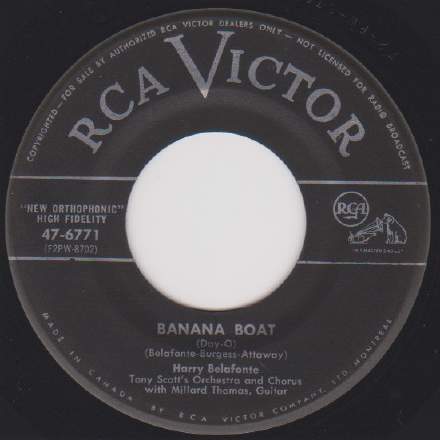 For a lot of people my age, Harry Belafonte’s signature tune will forever be associated with Bob Godfrey’s early-’80s animated telly adverts for a certain chocolate and caramel biscuit. (“Triiiii-O. Tri-i-i-O. I wanna Trio, and I want one now!") However, I didn’t realise until recently how incredibly popular his album Calypso (on which this song appears) was at the time, spending a whopping 31 weeks at the top of the Billboard pop chart on its way to becoming the first LP ever to sell a million copies. In this light, I was a little surprised how difficult it was to find a digital release of the song in its original mono format — most of the files I tried seemed to have some kind of stereo reverb added. I also noticed that all the versions appear to be roughly 70 cents sharp of concert pitch, which suggests that the tape machine may have been sped up slightly (around four percent, at a guess) when transferring the recording to vinyl — a common trick at the time for giving single releases a bit more spring in their step.

The song itself is actually a Jamaican folk number, rather than an original, and like a lot of traditional work songs follows a call-and-response format where a soloist interjects different riffs and lyrics between recurring group refrains (in this case “daylight come and me wan' go home”). There are some refinements here, though, in that the refrain alternates between two slightly different versions (most clearly differentiated by the top voice’s final note) and all the voices join in unison with the soloist for the line “six foot, seven foot, eight foot bunch”.

I love the dynamic use of room reverb on the improvisatory lead vocal during the intro and outro. This might have been done with faders in the control room, but it wouldn’t surprise me if it had actually been implemented ‘live’ in the recording venue (apparently Webster Hall’s Grand Ballroom in New York) by Belafonte simply wandering away from the mics while singing. The bass part, however, has something of a technical problem: the dominant root note ( C ) comes through the mix much more strongly than the tonic’s ( F ), which undermines the sense of the music, in my opinion. My guess is that a mic being placed right in front of one of the instrument’s soundholes might be the culprit, as this would have dramatically emphasised the main air-cavity resonance (typically just under 70Hz), and it’s the C note’s 65Hz fundamental frequency that’s booming out.

Besides that, I do also always find myself slightly taken off-guard by the player’s mistake during the very first “tally me banana” (playing an F instead of a G). I wonder if the bassist put it on his CV?