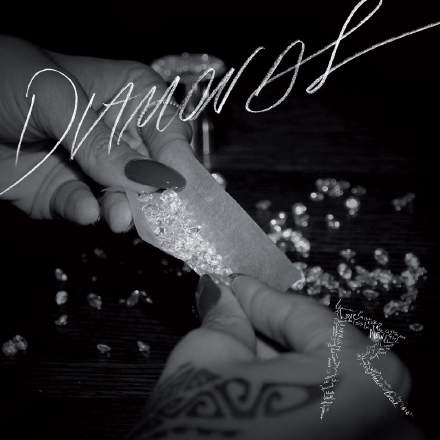 Whatever you call the interval of six semitones (tritone, augmented fourth, diminished fifth…), its usefulness in mainstream harmonic progressions is enormous, the strong dissonance driving you towards the promise of consonant resolution, whether or not that yearning is ultimately satisfied! However, its use as a melodic interval is much less widespread, especially in musical styles where memorability is the watchword, simply because it’s quite awkward to sing unaided. Indeed, back in the days when people anxiously referred to this interval as diabolus in musica, any vocal line employing it would have been deemed well-nigh unworkable, and even these days it’s rare to find prominent tritones in any popular melody without their being resolved immediately to the nearest adjacent pitch.

Which is why this song’s chorus caught my ear, because it boldly bucks the trend. The tritone in question first appears on the lyrics “you and I” at 0:56, jumping down from G to C-sharp. The traditional ‘soft option’ would have been to follow the leap pretty swiftly with the inwards step to D, but in this case that note of resolution doesn’t appear until a full two bars later, which delivers a long moment of melodic tension for any listener versed in the classical tradition. But even those more liberal ears who’ll happily accept an outward step to ‘B’ as sufficient closure, there’s still more than a bar to wait. In light of all this, I don’t think it’s any accident that the harmony of ‘Diamonds’ is so simple, modal and repetitive, because internalising it provides the best aid to memorising the unusual melodic contour.

On a more technical level, the lead vocal’s verse delay effect is also worth listening for, comprising as it does a single eighth-note tap in the right channel followed by a single quarter-note tap in the left channel. These repeats are clearly designed for conscious appreciation as part of the track’s generally trippy atmospherics, so the high frequencies and sibilance have been left pretty much unscathed. However, the low end of the effect return appears to have been filtered a bit, allowing plenty of warm, intimate lower mid-range to be added to the dry signal without it being sustained into muddiness.

The danger when you make echoes as distinct as this, though, is that they can confuse the audience’s comprehension of the lyrics, so it’s fortunate that this setup is quite forgiving in this regard. In stereo it benefits from the so-called ‘cocktail-party effect’, that innate human ability to focus one’s attention on a single sound source (a juicy bit of gossip at the other end of the bar) by perceptually filtering out sounds coming from other directions (the nerd opposite who’s lecturing you on the state of the roads). Because the two delay taps in this setup are spaced widely in the stereo panorama, your brain is better able to filter them out in favour of what’s going on at centre stage. But even in mono this effects patch has advantages, because wide-panned signals lose about 3dB in level compared with central signals when the channels of a stereo mix are summed, which more or less compensates for the loss of the cocktail-party effect in that scenario. Neat!

In addition to the delay effect, soloing the stereo Sides component clearly reveals some kind of widening effect being applied to the vocal: a kind of glossy, airy sheen. Again, it’s short on low frequencies to avoid mud, but exactly what it is is difficult to reverse engineer by listening. It doesn’t sound quite as detuned as the classic harmonizer widener, so either the pitch-shift has been kept very tight, or the slightly chorusey tone is coming from another source. I think I can hear some kind of pitch-variation in the tail of “you and I” at 0:18, so maybe it’s some kind of modulated delay? I suspect there might be some short-ish fizzy reverb in there too, because there’s a certain sort of diffuse hissiness in there that I always associate with that effect too. Without input from the man himself, the exact details will remain a mystery. In other news, is that a nasty piece of Auto-Tune fake vibrato at 2:54? Never like the way that sounds, because of the way the upper noise elements in the vocal are also wobbled around.

So what do we reckon’ll be the lead-off single for the next album. ‘Bags’ (hook-line: “We’re heavy, like three bags full”? ‘Treacle’ (hookline: “We’re pop, like the weasel”? I for one will be sitting right on the edge of my tuffet…