Do They Know It's Christmas 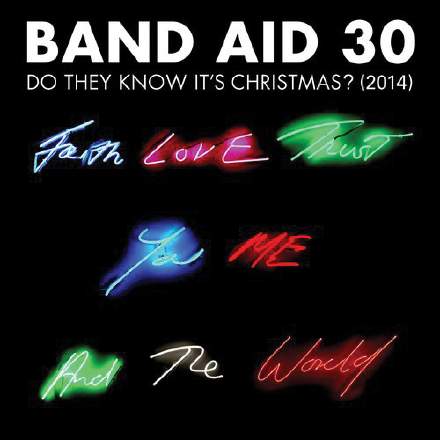 For all its good intentions (and indeed achievements), I can’t listen to this record without breaking out in a sweat. It’s hard to imagine what hell it must have been to get all these different singers to fit onto the same record. It’s bad enough trying to make sense of the differences in vocal style and tone with a live duet, but when you’re effectively trying to comp a complete performance from a couple of dozen independent overdubs by different singers it’s always going to be a bit of a car crash. Rita Ora’s machine–gun vibrato and R&B diva–isms make Sam Smith seem oddly bored at “throw your arms around the world” (0:46). After Seal’s throaty and fairly restrained performance, Ellie Goulding sounds like she’s had way too much coffee at “a song of hope…” (1:55). And then it’s back to earth with a bump as Sinead O’Connor’s hyperventilating intensity is followed by Bono’s hookline at 2:12, so phoned–in that it might have been a guide part left there by mistake. But it’s Goulding’s ‘woo–hoo’ at 2:01 that takes the biscuit for me, the cherry on the top of an already ruinously overwrought vocal confection — not only completely unnecessary, but also emotionally vacuous next to the rather more believable (if scarcely intelligible) huskiness of O’Connor.

So just keep reminding yourself it’s for a good cause. Preferably between each line.