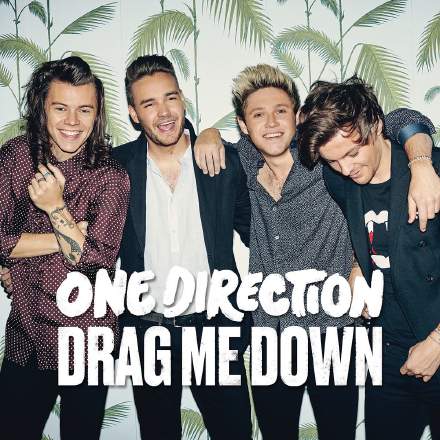 The downbeat of this song’s main half-time hook (first heard at 1:02) certainly packs a punch, carefully prepared as it is through the preceding section’s softer-edge rhythmic build-up and last-bar a capella drop. What’s even cooler, though, is the little game the guitar and vocal play with the second iteration of the “drag me down” lyric two bars later (at 1:09), both parts avoiding the downbeat accent, the former by maintaining its characteristic eighth-note anticipation, and the latter by delaying the word “down” an additional quarter note.

What that downbeat moment also highlights is a burst of what sounds like one of those synth ‘orchestra hit’ patches, which not only contributes to the rhythm by arriving on the downbeat and providing a further rhythmic pulse an eighth-note later, but also by cutting out brutally on the second quarter-note of the bar — neatly leaving space, of course, for that delayed lead-vocal onset. This is a great example of the production adage that a sound’s ending is often just as important as its beginning. Unfortunately, this truism is typically underappreciated amongst recording musicians in my experience, and it’s a rare project-studio pop production that doesn’t benefit from a little editing to tighten up this aspect of its arrangement.