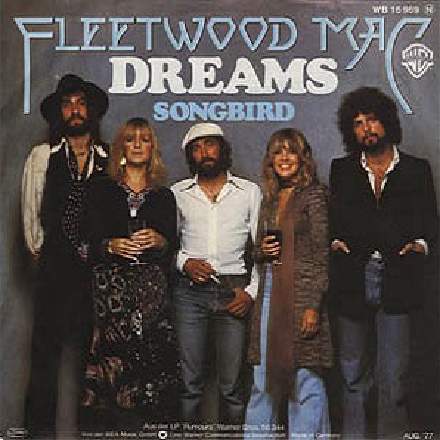 This song, the band’s only US number one single, is unusual in that the original live-session lead vocal ended up in the final mix, according to engineer Ken Caillat in this Sound On Sound magazine article . (They tried repeatedly to better it, without success.) It’s also interesting that Stevie Nicks' mic was a dynamic model (Sennheiser’s MD441, as I understand), not a large-diaphragm condenser. Now, clearly this deprives the singer’s timbre of some ‘air’ and intimacy compared with many modern records, but the compactness and density of the mid-range nonetheless allows her to hold her place assertively in the balance, as well as giving tremendously robust vocal transmission under low-bandwidth playback conditions such as AM radio.

Approaching this song with my engineering hat on, after many years of simply listening as a punter, I was surprised how extended the depth perspective was. Those brutally dry drums join the present bass sound to define a nice close foreground boundary, with the vocals (and their dusting of what sounds like chamber reverb) slightly in their shadow, while the middle ground is occupied by the electric piano and electric guitar by virtue of the former’s restrained tone and the latter’s swirly effects. Then the rear boundary, already hinted at by the vocal reverb, is set way back by the chorus section’s super-ambient high organ/synth line. My only slight reservation is that the backing vocals end up feeling further forward than the lead during the pre-choruses because of their airier, drier mix sound, and I do find this a little distracting. That said, this aspect of the balance works a lot better on a single Auratone, so it’s conceivable that the balance was targeted specifically to maximise the band’s mass-market appeal via the primarily mono and bandwidth-limited radio systems common at the time.

I love the low-end weight in both the kick and the snare, but the way the kit’s mixed overall is otherwise somewhat thought-provoking. I wonder, for instance, whether there’s just the one overhead mic, given that the hi-hat and all the cymbals seem to emanate from the mid-right location — for example, the two crashes at 3:04, and what sounds like a ride tap at 1:28. (Back in the days of 24-track tape, it wasn’t uncommon to ditch one side of a stereo-miked source if you needed to free up another track for overdubbing.) Further evidence for this is that the toms also sound much fuller in the mix’s right channel. However, the toms are also clearly spread across the panorama in stereo (for example, during the fills at 1:19 and 3:36), and yet somehow also sound too diffuse in comparison with the kick, snare and hi-hat for me to believe that they’re coming mostly through close mics, so it’s a bit of a conundrum. Whatever the reason for it, though, this depth disparity between the toms and the rest of the kit again bugs me a bit.

Were I evaluating the chorus' acoustic guitar sound on its own terms, though, I’m sure that would bug me a lot more! Go on, focus your attention on it — it really is ridiculously thin and scratchy! What mostly redeems it in my mind, though, is its arrangement context, where it’s effectively filling a percussive role, becoming a kind of tuned shaker counterbalancing the hi-hat’s rhythmic pulse on the other side of the stereo panorama. Again, though, the hard panning and super-bright transients pull it very upfront for stereo hi-fi listeners, so personally I still struggle to reconcile myself to it wholeheartedly.