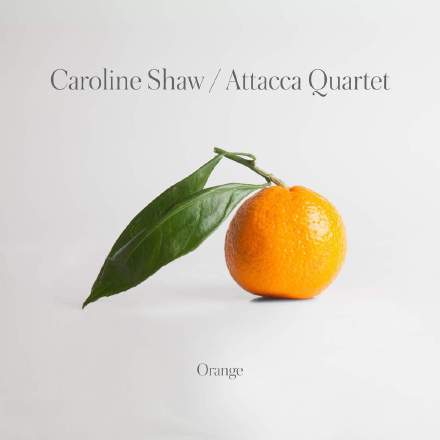 As a violinist, there are few things that annoy me more than the unimaginative string arrangements that blight so many commercial music releases. So when I’m king, my first act as ruler will be to force Caroline Shaw’s latest album, Orange, into the hands of every budding music producer and shout, “There! That’s how you do it!” It is, quite simply, a masterclass in interesting and engaging string-arrangement techniques.

Even in just this one track, you’ve got huge dynamic and timbral variations, snap pizzicato, stopped harmonics, sonorous senza-vibrato chords, plaintive pitch fall-offs, arpeggiated quadruple-stopping, near-pitchless percussive brushing and gently bounced bowing — not to mention a bunch of cool rubato and alleatoric effects besides. Honestly, I defy anyone with an interest in string arranging to listen to this and remain uninspired.

That said, this isn’t a record that I think I’ll revisit very often on musical grounds because I just can’t help feeling that, under its undeniably dazzling surface, it’s rather hollow on the inside. The release publicity made much of Shaw’s interweaving of well-known fragments from the classical repertoire into her own compositions throughout this album, and I did initially find myself drawn in by this intriguing game of ‘Name That Tune’. The longer I listened, though, the more her approach seemed like smoke and mirrors, borrowing a veneer of establishment gravitas and feel-good factor from her celebrated forebears without developing a sufficiently compelling musical logic or impetus of her own.

To put it another way, it feels like I’m listening to a film’s underscore without the visuals; however great the arrangement and performance, there’s little sense of why it’s doing what it’s doing at any given time — where it’s taking me and whether I’ve got there; if I’m at the beginning or near the end; and whether a particular moment is thematically pivotal or just a bit of transitional figuration.

Now, I do have a pretty high tolerance for contemporary classical music and enjoy plenty of works that are much harder on the ear than this, so I don’t think this is just me being reactionary. (To be fair, I’d also have preferred a little less ostinato and a little more melody — so I’ll concede that I’m at least slightly turning into my Dad!) Fundamentally, listening to this album reminds me of auditioning presets on a top-grade virtual instrument: each new patch may be thrilling and inspirational, but that doesn’t make it great music.