(Everything I Do) I Do It For You 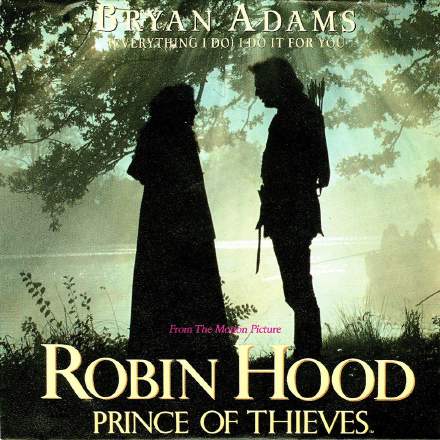 Having lived through this song’s 16-week reign at the top of the UK charts, it’s tough to be impartial. Those hyperinflated MOR drums. Those horrible S&S strings and JV1080-era synth pads. The daytime-TV piano and guitar vamping. And that unpardonably onanistic instrumental outro, battering an innocent IV-I progression into submission. Also, I’ve never understood the appeal of that ballad-bass cliché that involves repeating a chord’s root note with the following rhythm: dotted quarter note, eighth note, half note. It always seems so flat-footed. That the bassist does his best to put little fills at the tail end of some of the half notes helps a little, but by the time we reach that rhythm’s 50th iteration I find myself contemplating how to fashion a noose from my earbuds.

Despite my debilitating cheese-allergy, however, there are some elements for which I can muster genuine appreciation. Film-affiliated ballads are suckers for theatrical key changes, and there’s a corker here. The middle section shifts dramatically down a whole step from the tonic Db chord at 2:12, before working its way back into home territory via a falling-fourths cycle of major chords (a favourite device of the song’s producer Mutt Lange).

Another thing I like is how the static pedal-tone piano bass line of the first verse gives the music a more hesitant mood by virtue of its inverted harmonies, whereas the bass guitar makes the second verse sound more determined by nailing most of the chords into solid root position. It’s not all rosy, because that same tactic also makes the musical flow of the second “don’t tell me it’s not worth fighting for” section (1:42) weaker, removing the nice contrary-motion character between the bass and vocal lines at 0:44 and replacing it with an unwelcome parallel-fifths hollowness as the Eb-Db bass and Bb-Ab vocal movements combine.

On a more technical level, though, there’s something to marvel at in every Bob Clearmountain mix, and his automation work almost always enthralls me. Take the second verse, for instance. Notice how the backing parts bubble up between the vocal phrases; first the piano and guitars, then the synths at 1:25 and the bass fills at 1:34 and 1:38. And while you’re enjoying that, keep your ears open for the tambourine, which sounds like it’s been treated to a 16th-note tempo delay. (If you’re struggling to pick it out, it’s more clearly audible in the outro from 4:08.) This is a great trick for getting extra rhythmic value out of simple percussion parts, and here it also works to unmask the tambourine from behind the powerful backbeat side-stick.