Exit Music (For A Film) 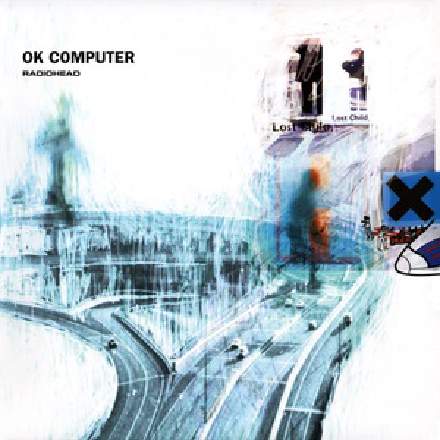 There are better-known singles from Radiohead’s seminal album OK Computer, but this is easily the standout track for me — one of those rare production masterpieces that’s chock full of bold and unusual creative decisions, but which still packs an immediate emotional punch on first listen. On a musical level, a key ingredient is the heavy use of falling chromatic alterations, for instance the major-minor movements at 0:55 (B major to B minor) and 1:09 (E major to E minor) and the false relations at 0:31 (A sharp in F# major to A natural in D major) and 1:50 (C sharp in F# major to C natural in A minor). Indeed, I reckon it’s partly the cumulative effect of these that makes the middle section’s rising major harmonies (B minor to C# major and F# major to G major) so dramatic once the bass arrives.

Although the structure feels superficially quite traditional from the perspective of arrangement build-up, the AABACA construction isn’t exactly a standard trope these days, and there’s no ‘chorus’ to speak of either. In a sense it’s probably closer to the old Tin Pan Alley ballad form (AABA) than today’s more common verse-chorus model — but, by that token, you could just as easily call it a rondo! Furthermore, the B section plays fast and loose with traditional four-square structural norms by grouping its 24 beats into a weird five-bar pattern of 6-4-6-4-4. And yet it all feels like the most natural thing in the world — that’s the genius of it.

What really takes my breath away, though, is the way the arrangement and mix are continually manipulating your expectations. The opening guitar is a great example. It starts quite strongly to catch your ear, but then recedes over the first couple of bars, drawing you in to listen more attentively, and goes on for longer than you’re expecting to heighten anticipation for the singer’s entry. Which means it’s doubly startling when the vocal suddenly arrives both super-close (by virtue of those crispy lip noises and exaggerated proximity effect) and huge-sounding (by virtue of the relative mix level and that cavernous reverb).

But the headline production move has to be the transformation at 2:50, when the drums and bass join in. Again, I love how the tiny ride-cymbal hits over “there’s such a chill” imply that the drums are already turned up really loud (how else could you hear such a soft detail so clearly?), thereby increasing the illusion of power when they properly barrel in a few seconds later. And it’s a good thing too, because the bass and vocals are lionising so much of the spectrum that the drum kit has to communicate its subjective power primarily via aggressive cymbal transients and weapons-grade compression pumping. Taken in isolation, it’s an extremely peculiar mix sound in objective terms. Experienced in context, though, it’s extraordinarily effective and evocative, and a powerful reminder that great record productions must often dare to reach far beyond mere facsimile in the service of musical expression.