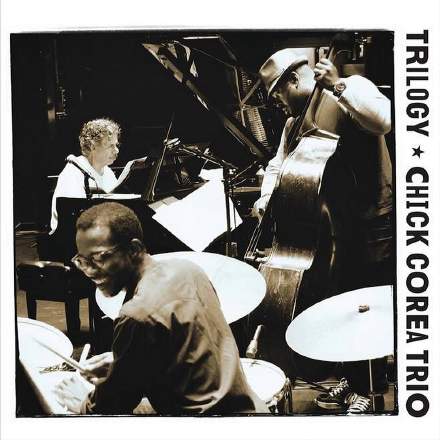 The incredible musicianship of Corea’s Trilogy live album justly garnered itself a pair of gongs at February’s Grammy ceremony, but I find the sonics something of an acquired taste. Recorded on tour in various stops around the world, the 17 tracks inevitably vary slightly in this respect, given the different venues, but award–winner ‘Fingerprints’ provides a reasonably representative case study.

One fundamental question I find myself asking with most acoustic recordings is this: where am I, the listener, sitting? From a stereo perspective, we’re presented with something like a player’s perspective for each instrument here, such that the low notes of the piano join the hi–hat on the left–hand side, the bass and kick are both in the centre, and the piano’s high register reaches out towards the low tom. While there are plenty of precedents for this approach in the genre, I’ve always had a bit of difficulty getting my head round effectively listening from three different locations at once, and I’d much rather they’d taken their cue from the on–stage layout by presenting narrower piano and drums images located towards the left and right sides of the panorama respectively. That said, given the heavily out–of–phase piano pickup on some of the other cuts on this album (eg. ‘The Song Is You’), I’m not sure this would have been a viable mixdown option under the circumstances — the tonal implications of partially mono–summing the stereo mic pairs (to narrow them) would have likely been ruinous.

But this is only one facet of the ‘Where am I sitting?’ question, because there’s also the important issue of subjective distance. I find it disconcerting that the left and right extremes of the drum kit sound hyper–close, like they’re located right where my speaker cones are, whereas the snare and toms feel like they’re a good few feet back (despite decent definition), and the bass drum sounds indistinct and diffuse. All this is perfectly understandable in light of the live–oriented close–miking setup in the CD–booklet photographs (spaced stereo overheads pointing down from two feet above the cymbals, plus tight snare, tom and kick spot mics), but couldn’t a little more have been done at mixdown? Some transient reduction or HF softening of the overheads, perhaps, or an artificial early reflections patch to push the cymbals a little further away, and maybe some processing of the bass–drum close mic to bring that a little closer. You’ll find plenty of commercial jazz releases with similar depth–perspective distortion, but I’m no great fan of it, and I’d advise anyone starting out recording in this field against accepting this unquestioningly as the status quo.

My final gripe is that the mix sounds like it’s too concerned with avoiding spill. I’m guessing, for instance, that the bass sounds rather unnatural (especially during the solo) because we’re mostly hearing its DI signal, not the mic. By the same token, I wish the hall mics had been used more throughout, because at the moment it sounds like they’re being ridden in only for the sections of applause — whereupon the band sound suddenly seems to cohere better to my ears.