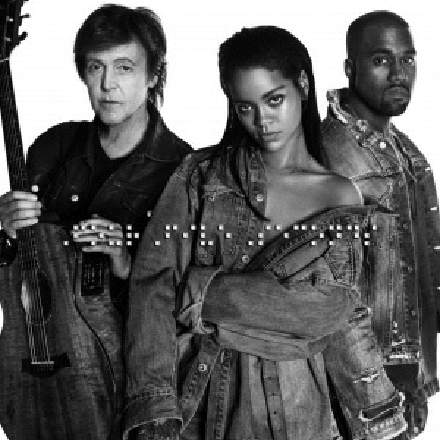 There’s something very strange going on with the vocals here: it sounds like there’s some kind of electronically mangled backing–vocal part behind the lead line, but one that’s frequently out of sync with the lead’s melody and harmony. The question is whether it’s intentional, because Kanye West is a past master of taking what seem like unusably off–the–wall ideas and releasing them, effectively anointing them ‘the new cutting edge’ by force of personality. In this case, I think we’re actually hearing an attempt to deal with unwanted guide–vocal spill from Paul McCartney on the acoustic–guitar mic.

It’s not hard to imagine a scenario. Macca had a spare half hour, picked up a guitar and recorded a song demo for Kanye West, using separate close mics for guitar and vocals. West adapted the key and structure digitally to overdub new vocals with Rihanna. Excited with these additions, they wanted to rerecord the acoustic guitar without the spill, but McCartney couldn’t fit it into his diary soon enough, and they didn’t want to replace him with a sessioneer, lest the erstwhile Beatle’s name should drop off Rihanna’s cover art. They may also have tried (with limited success) removing Paul’s vocals with one of those whizzy spectral–restoration tools, which would provide an explanation for the vague, electronically smeared nature of these artifacts. I’d guess that some bright spark said “Hey, that actually sounds kinda cool” and suggested they fall back on that old production maxim: if it can’t be fixed, make it a feature!

Of course this is all surmise, but there is one piece of evidence that suggests I’m not far off the mark: two roomy–sounding pitch–shifted vocal interjections in Kanye’s first verse (0:55 and 0:59), which sound like they’ve been allowed to escape any spectral processing as part of the ‘feature’. Pitch–shift those down five semitones and they sound a whole lot like Mr McCartney.