Genie In A Bottle 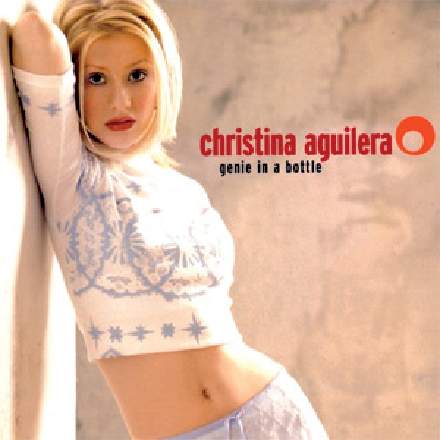 This track’s 32nd-note kick-drum pattern remains unusual in mainstream pop to this day. The long wavelengths of a kick-drum’s low frequencies usually take time to decay (if not in the signal itself, certainly in the real world of resonant playback systems and domestic room modes). If kick hits are too close together, the low frequencies don’t have time to decay before the next hit, reducing the punch of each hit and swamping any bass part in the lower octaves. Styles that rely on fast kick work (such as high-speed metal) have typically evolved clicky, sub-bass-light kick sounds, but the ‘Genie In A Bottle’ production team overcame this obstacle in a different way.

Sticking a steep 80Hz low-pass filter over the mix reveals that the kick sound was created by layering several samples. The one that provides the serious 45Hz weight isn’t triggered on every note, but accents only a few of the beats. This avoids low-end bloat, but also adds a layer of expression to the composite kick part, increasing the musicality and dance-ability of the groove. Note that this low-frequency layer is focused below the range of the bass line, which has been restricted to a region above 50Hz: each has its own place in the spectrum.

Switching the filter to its high-pass mode and whisking its cutoff up to 12kHz reveals another trick. Throughout the track, but especially in the choruses, there are a number of synth layers that don’t serve much musical purpose, but which hammer the top octave of the frequency spectrum, and imply that the mix has a super-extended ‘airy’ frequency range. The beauty of these kinds of sound effects is that they can supply truly poptastic HF sparkle without the need to over-process the high end of your main musical parts.

Christina, as you’d expect, delivers a virtuoso vocal performance, but while a lot of singers can deliver a decent lead track, only the best can nail the backing vocals. The very act of layering backing vocals tends to homogenise their sound, so it’s crucial when recording that the vocalist isn’t allowed to sound as bored as they probably feel! That’s not a problem here: I’m extremely impressed at how committed the multitracked backing-vocal performances are. If you can still get hold of the CD single, you can learn a great deal about this from the a capella version of this song.

Critiquing this track as a Classic Mix made me feel ancient, because I actually interviewed David Frank about the making of this track back when it was first released. He was a tremendously nice guy, as most of the top-flight people tend to be. Comments in that interview that really struck me were that he mentioned listening extremely quietly in mono while programming, as a way to check the quality of the track, and especially the groove. I’m not sure whether I agree with that as a general thing – maybe it’s more of an issue of a pop track than for something more obviously club-oriented. And speaking of groove, it’s also interesting to remember that he used a reverse hi-hat sample here for the sixteenths, and I do like the way that gives a kind of sultry laid-back feel to the whole thing.