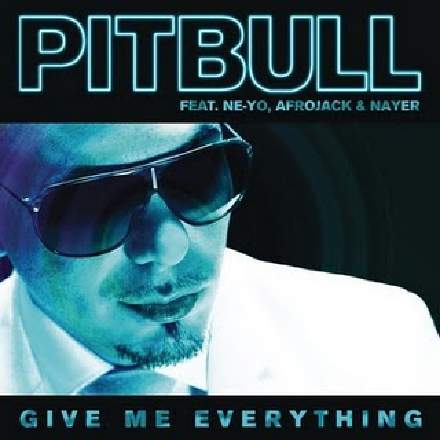 This recent floor-filler hinges on its vocal production, and part of what keeps the interest going here is the contrasts between the different vocal textures: Pitbull’s rasping, loosely triple-tracked rap (for example at 1:00); Ne-Yo’s piercingly pitch-perfect high melodic hook (first heard at 0:15); Nayer’s vaporous “Don’t care what they say…” refrain (first heard at 0:31); and Pitbull’s 50 Cent-soundalike low-register “Excuse me…” sung line (first heard at 1:23). This is where getting guest vocalists in to contribute to a track can really pay off, especially if each singer/rapper works hard to maximise the unique character of their own delivery.

But it’s not just the ‘headline’ vocals that appeal to me, because there are also lots of great little low-level vocal details in there to provide short-term light and shade. The clearest of these is the “hey” echoing Ne-Yo’s hook at 0:46 and elsewhere, which suddenly opens out into the larger acoustic space already suggested by the long lead-vocal delay/reverb effects tail. Just as interesting, though, are the subtle ‘oooh’ backing vocals that support both Ne-Yo (at 0:53, 2:15 and 3:37) and Nayer (at 1:53 and 3:15) — nothing special in their own right, but just enough to gently warm up the texture.

And while I’m on the subject of nice touches, let me also draw your attention to the way the cliché of the machine-gun dance snare fill is subverted, for example at 2:00-2:05. A lot of people would have been content to let that kind of fill build all the way into the section boundary at 2:07, but here it’s been cut short by a full bar, leaving an understated little funky drum break to hold the rhythm instead, thereby clearing a gaping hole in the spectrum for Ne-Yo’s “grab somebody sexy” to pop through effortlessly. Smart.

Another little vocal detail that tapped me on the shoulder: the almost subliminal vocal “baby” overdubs at 2:39 and 2:41. It’s somehow surprising that they’ve been mixed so low, but as a result the effect is slightly unsettling. I like it!

Returning to Pitbull’s main lead vocal, it’s interesting how much Manny Marroquin has increased the high-frequency density with compression, EQ, and effects to combat the powerful masking effects of the rhythm track’s upper percussion parts. Although it doesn’t sound so drastic while the vocal’s in with the rhythm track, the “Lindsay Lohan” rhythm drop gives a brief blast of the unmasked timbre which provides some food for thought.

The other aspect of the lead vocal treatments that I still wanted to mention was the triple-tracking. As I commented in the main critique, the looseness of the tracking here is an important means of creating arrangement contrast, but it does bring with it one less desirable side-effect: reduced lyric intelligibility. Both “at least you’ll feel on top of the world” and “I’m gonna fall on top of you girl” in his verse at 2:22 both fall foul of flamming consonants, for instance, and take a bit too much effort to decipher for a chart record, I think. I reckon a little careful editing could have taken care of that without significantly reducing the desirable looseness of the vocal ensemble, so it’s shame it wasn’t done – it’s not a bad lyric, after all.