by The Infamous Stringdusters 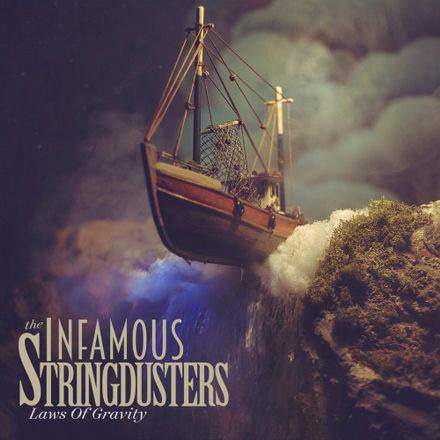 This single from the Infamous Stringdusters’ Grammy-winning album Laws Of Gravity is definitely worth checking out for its meaty upright bass tone, especially when the instrument plunges down to low E for the solo section at 2:05, delivering that wonderfully confident 41Hz fundamental. Besides this, one detail that particularly struck me was the momentary D# dissonance Chris Pandolfi injects into his banjo solo over the prevailing C-major harmony at 2:10. My first instinct was ‘oops!', but on repeated listening the melodic logic of its rising line now makes more sense, despite that initially disconcerting half-tone clash. It actually reminds me of the classical repertoire, bizarrely enough, because the history of notated music is littered with examples of ‘horizontal’ (ie. melodic) motion justifying odd-sounding ‘vertical’ (ie. harmonic) sonorities. It’s just that I wasn’t quite expecting it in mainstream bluegrass!

One other little thing also niggles me just before the final chorus: the way the vocals fade out on the word “me” (2:43). It’s as if a fader is pulling them down in level, or like they’re suddenly moving away from you, rather than just ending their notes naturally, and I can’t help feeling that’s counterproductive given the naturalistic conceit of the song (and indeed its ‘in the studio’ Youtube video). If they’d wanted to adjust the length of that caesura without re-recording anything, surely it wouldn’t have been rocket science to extend or contract those notes to order, even without using any fancy time-stretching software. I do this kind of thing all the time using simple cross-faded edits, and I’d expect that the smooth homogeneity of the layered vocal tone in this instance would only make it easier to manage. I suppose this decision might have been made at mastering, where the edit wouldn’t have been as easy, in which case the fade-out method (with a reverb-tail concealment) could well have been the most expedient option. Whatever the reason, it’s a shame, because in a small way that moment pulls me out of the track emotionally at one of the moments I’d most want to be fully engaged, and somehow undermines the sense of arrival for that final band entry.