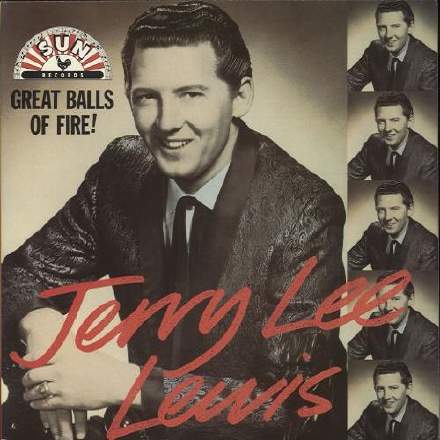 One of the best ways to focus attention on your lead vocalist is to get them singing on their own, and yet vanishingly few records have ever been successful without the support of a backing track. (Janis Joplin’s ‘Mercedes Benz’ and Suzanne Vega’s ‘Tom’s Diner’ are the only ones that immediately spring to my mind.) So I don’t think it’s any surprise that plenty of great rock songs feature some kind of call and response between a band riff and the lead vocal. It’s the best of both worlds, really, because you can have a big, exciting band sound, while still effectively hearing the vocal on its own. And this signature Jerry Lee Lewis song is one of the classic examples of this concept for me, following close on the heels of a couple of similarly iconic Elvis Presley instances, ‘Heartbreak Hotel’ and ‘Jailhouse Rock’.

Now, as one of the defining songs of the early rock and roll era, this production has garnered plenty of critical commentary, but you’ll find precious little information about the recording session. Yes, we know a bit about the recording venue, Sun Studio in Memphis, as well as the general working practices of its owner Sam Phillips and his pioneering use of tape slapback. But specifics about the studio layout or miking setup for this Jerry Lee Lewis session? No dice, as far as I can see.

Mind you, one thing that is pretty well-documented is that the song’s original 1957 recording was played by a trio comprising Lewis on piano and vocals, Sidney Stokes on bass, and Larry Linn on drums. And we also know that it wasn’t common to close-mike piano or drum parts during that era. So, with this in mind, it’s a bit of a mystery to me where exactly the sharp-attack backbeat sound you can hear on the recording is coming from. On first listen, you’d probably say it was some kind of side-stick from the drummer, but if that were the case, shouldn’t any proper snare hits (such as the one at the end of the opening riff, or the fill before the final word “mine” around 1:36) also be much more present and upfront? But they aren’t. They’re just as roomy as I’d normally expect for drumkit recordings of that era.

So if we eliminate the drummer as the source of this backbeat sound, could it perhaps be some mechanical noise from the piano? Well, if so, then why doesn’t it appear during the opening riff, or in the stamping syncopated chords under the “mine, mine, mine, mine” build-ups (around 0:42 and 1:35)? And before you suggest it’s something to do with the sustain pedal, the rhythm would make no sense for that, and it’d also be inhumanly fast when it switches from the backbeat to accenting the eighth notes of the main call-and-response riff. Neither do I buy that it’s Lewis tapping his foot. Yes, you can clearly see him doing that in contemporary footage of his live performances, but again the rhythm we’re hearing on the recording doesn’t really tally with that – he tends to stomp his foot on all four beats, not just on the backbeat.

But what about the missing backbeat hit after the word “thumbs” around 0:46? Might the fact that this coincides with an ad libbed right-hand glissando indicate that our ‘mystery side-stick’ is part of Lewis’s normal rhythmic piano vamping? Nice try, but if you listen to the solo section that starts around 0:55, there are four glissandos in a row that do have backbeats underneath them, which rather undermines that argument. What about the bass player, then? Well, I suppose the backbeats could be string slap, but it would have involved alternating unslapped downbeats with slapped backbeats, as well as physically managing the fast eighth notes in the riff sections, so that seems fairly implausible to me as well.

All of which leads me to a fun conjecture! Trawling through Lewis’s early live recordings, you can’t help but be impressed at how he manages to combine such blistering piano performances with his amazing vocal showmanship, but you do also have to concede that, in all the excitement, Lewis does have a tendency to rush the tempo – leaving the rest of the band trailing slightly in his wake on occasion! However, the Sun Studio recording maintains a commendably consistent tempo throughout, with the final “I chew my nails and I twiddle my thumbs” section (around 1:37) actually being a fraction slower than first one (around 0:43). So my theory is that the transient we’re hearing is Sam Phillips in the recording room hitting something (maybe a pencil on a music stand?) to dissuade Lewis from rushing!

In that case it would of course have made sense for him to be standing close to the piano (so that Lewis could hear his rhythmic tapping over the general racket in the room), in which position he’d have been well within range of the piano or vocal mics. My money’s on the piano mic, simply because I can’t hear the backbeat transients hitting the vocal channel’s slapback delay, but maybe that’s just because the tape delay’s dulling them enough so that the echoes aren’t noticeable in the mix. Either way, let’s hear it for Sam Phillips and the greatest uncredited rock-and-roll pencil performance of all time!

I’m just off to update Wikipedia…