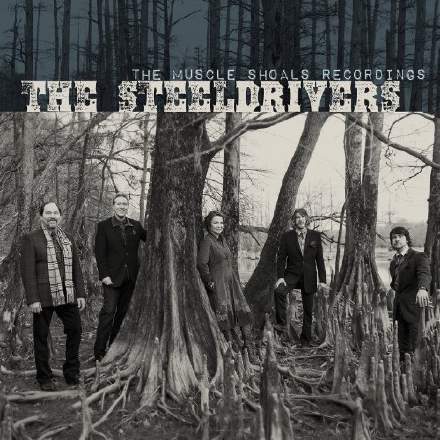 I’m about as un-hillbilly as any man alive, but on a production level I find myself increasingly drawn towards bluegrass records, as havens of quality musicianship and fine acoustic timbres. This year’s Grammy winner for Best Bluegrass Album is one such specimen, as evidenced by this song.

On a wonderfully relaxed groove from the bass and acoustic guitar, the banjo and mandolin overlay their delicate filigree, while a gorgeously syrupy and spacious fiddle tone floats around them. But the sonic highlight for me is the mellifluously blended three-part vocal harmonies, testimony to singers whose timbres have naturally grown to complement each other through years of live performance. Notice in particular the 3.5kHz ‘country twang’ emphasis in Gary Nichols’s lead-vocal tone (particularly strong on “where everything is going” at 0:26, for instance). Had he overdubbed the backing vocals himself, there would likely have arisen a harsh energy build-up at this frequency. As it is, though, the other voices go easy on that zone, and instead fill out the lead’s sparser spectral areas to generate a group texture that’s peerlessly solid and homogeneous. But, best of all, each singer’s performance is so nuanced and musical that ‘blend’ never translates to ‘bland’. It’s a vocal masterclass that singers in any style could learn something from.

If you see this band live, the banjo and mandolin tend to share a mic to the left-hand side (from the audience’s perspective), while the bass, fiddle and lead vocalist cluster around a shared vocal mic on the right. However, the producers have sensibly abandoned this layout in stereo, in favour of more musically sensible positioning. So the bass and acoustic guitar (serving double-duty as percussion by virtue of its strong pick noise) are placed centrally, providing the rhythmic and harmonic backbone, and the lead vocal joins them there, as befits its lead role. What’s more interesting to me is that the vocal harmonies aren’t spread across the stereo image at all, as is common in other styles. Irrespective of whether that’s just the result of recording the singers around one mic, as they’d perform live, I think it’s amply justified from an aesthetic perspective, because it maximises the cohesion between the three voices. (Stereo separation would have ‘unblended’ them perceptually, because of the psycho-acoustic ‘cocktail-party effect’.)

It stands to reason that the banjo and mandolin parts are set on opposite edges of the image, taking them out of conflict with the vocals and spreading the fine rhythmic detail evenly across the panorama, but what about the fiddle’s centre-right location? While that’s more of a personal judgement call, it’s one I’d happily concur with. Firstly, the fiddle’s potential for making the overall mix image feel one-sided is mitigated to a degree by the stereo width of the fiddle’s capture — it’d be more of a problem if it were a point source, in my opinion. And the right-hand side of the image seems the more appropriate too, because it somehow balances the banjo’s tone on the opposite flank, which is significantly more ear-catching than that of the mandolin which constitutes its rhythmic counterpart.