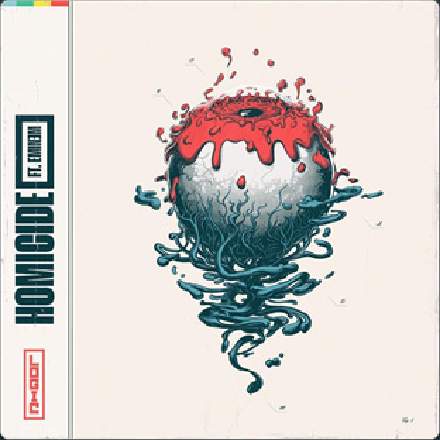 There’s a certain irony in these two guys taking a pop at contrived Auto-Tuned rapping, when both of them here deliver single-breath phrases of such length that I can’t believe they weren’t faked in the edit. Logic kicks things off with a full 24 seconds of uninterrupted rapping without breaking a sweat, and while I respect his skills a great deal, it strains my credulity to imagine that he really did that live. Putting aside how much this might shoot the performers' authenticity in the foot, though, I’m also getting tired as a listener of trying to untangle such verbal machine-gunning. If their rhymes are honestly so important to them, then it seems counterproductive to strip out so many of human speech’s natural pauses and breathing spaces, because that just makes it a chore to work out where one word/phrase starts and the next begins. Or, to put it another way:

That said, I like what they’ve done with Eminem’s well-known “chika-chika-chika Slim Shady” catchphrase in the choruses (0:13, 1:01, and 1:39). Given that most people are likely to know the featured artist’s identity before listening, the moment we hear the first “chika…” at 0:25 it sets up an expectation that Mr Mathers is about to make an entrance. However, this turns out to be a tease, because it’s only after the catchphrase’s third appearance that we actually get that payoff. Furthermore, the tease is heightened each time, with the second instance tripling the “chika” count, and the third adding a further five-chika rendition a couple of beats later (1:53).