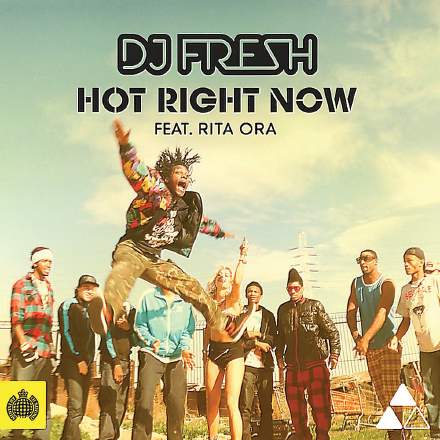 This production’s “throw your hands up!” refrain rather neatly demonstrates some of the pitfalls of using vocoders in a high-energy mix. The first challenge when vocoding is that although most bright, synth-based carrier signals have enough high mid-range energy to render the mobile resonances of vowel sounds easily recognisable, they don’t usually have the same HF density as the noisy elements of natural vocal signals, so the intelligibility of sibilant and fricative consonants (eg. ‘s’, ‘sh’, ‘f’, ‘h’, and ‘th’) tends to be weakened. Some sophisticated vocoding setups work around this by using triggered noise to fill out the carrier signal where required, or by separating out and mixing in noise elements from the modulator feed. It’s possible that something like this is going on behind the scenes here too, because the single sibilant of “hands” comes across pretty well, but the fricatives of “throw” and “hands” aren’t nearly as fortunate.

Another difficulty when vocoding is that less strongly resonant phonemes such as ‘l’, ‘m’, ‘n’, and ‘r’, which rely more heavily on their lower frequencies for audibility, lose out when the carrier signal has a high-frequency bias. Again, “throw” and “hands” both suffer to some extent from this. Finally, the typical time response of the envelope tracking and filtering in each of a vocoder’s bands is, in my experience, often a little sluggish, which means that the swift close/open envelope contours of stop consonants such as ‘p’ and ‘b’ are softened, and I think this is also compromising the word “up”. The result of all this is that by the time the track’s firing on all cylinders at 2:34, all you’re really left with is “oh ya ads uh”, only bailed out by Rita Ora singing along eight bars later.

Love the wide-vibrato synth sfx in the build-up to the first chorus (0:27-0:33), and it goes even wilder at 1:17. In general, actually, I do like a lot of the incidental programming in here, even though some of this does get a bit lost behind the main fizzy electro-organ rhythm patch.

As with the recent Wiley singles, I do wonder whether the clashes between the bass and upper parts are really helping the production. For example the bass ‘A’ against a ‘B’ above at 0:43 and 0:59; or the bass ‘G-A’ motion against the ‘C-B’ above. It’s not that I’m expecting Bach chorales, but these instances just feel a bit weak to me. The progression at 1:39-1:44 and 2:28-2:33 makes much more sense, on the other hand, even though it leads to a fair bit of dissonance too (especially in relation to the lead vocal line) – perhaps because of the C-D-E motion returning to the key note at 2:34, although I’ve not yet quite made up my mind about that the mechanics of that one yet.