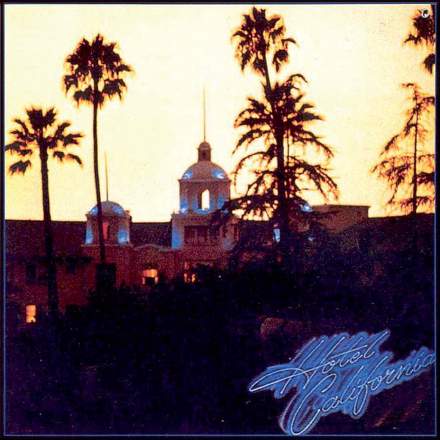 Re-reading Sound On Sound magazine’s ‘Classic Tracks’ article about this production, I smiled at producer Bill Szymczyk’s assertion that the drums were “kept as open as possible.” I can only assume that Studio C at Criteria Studios must have been dead as a doornail acoustically, because this sound is pretty much the archetype of a tight, dry, hard-panned ’70s rock kit. I’m not complaining, because it’s a lovely sound. The kick has an efficient meatiness in the 70-80Hz zone, leaving most of the low end open for the athletic bass line, while the tasteful 700-800Hz peak was ample to cater for radio compatibility before the following decade’s HF arms-race really got going. The snare and toms are replete with low-end goodness, too, rather than relying on their HF to punch through, and the hi-hat capture balances the needs of stick-attack definition and rich sustain masterfully — an important issue, given the intricate hat work at 3:28-3:50. Even the cymbal hits are rich, which is often a challenge in dry acoustics, although I would have liked them more full in the stereo picture, because they feel a bit constricted panned hard with the hat.

Leaving aside the oblique lyrics, the main thing people wax lyrical about with this production is the outro’s solo guitar. I agree that the parts are great, but I think people underestimate the contribution made by the rhythm instruments to the power of this section, so let me mention a couple of things that stand out to me. Firstly, it’s noticeable that the solo parts frequently come to rest towards the end of every two-bar musical unit, leaving room for the bass/drum fills to shine and taking the listener on frequent little detours. Particularly good examples are at 4:50 and 5:15, but it’s a theme throughout. To me, this is one of the reasons why these guitar solos can hold your attention for such an extended period of time, because the constant (and varied) punctuations are constantly returning you to the guitars with refreshed attention.

This has got to be one of my favourite bass parts of all time – equally as good as the guitars here for me. Interesting little thing going on at 3:27 too: the backing cuts pretty much dead on the fourth beat of the bar. an edit? A programmed/manual mute? It doesn’t sound natural, but it has quite a nice rhythmic effect going into the drop verse section.

The other thing that always strikes me when we reach the climactic two-part guitar riff at 5:38 is how the bass finally abandons the wilful independence of its reggae-tinged moves thus far, throwing in its lot with the guitar’s straight sixteenth-notes. It’s this, as much as anything the guitarists are doing, that really lifts this moment into the classic rock stratosphere.