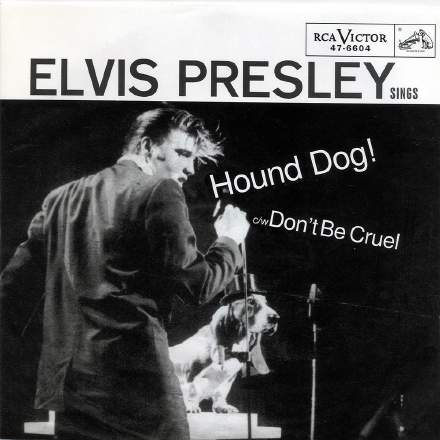 Even after almost 60 years, this production packs a tremendous amount of energy and excitement into its two minutes, a feat I find all the more impressive given the comparatively limited musical scope: a lead melody based around three notes most of the time (five in total); only two verses, each repeated three times; and a fairly small-scale line-up of lead vocal, drums, bass, one guitar, and three-part BVs/handclaps from The Jordanaires. Many of the memorable moments are so direct and stripped back too, such as the verse vocal’s E-flat blue-note lead-in, the machine-gun snare fill at the end of each verse, and the wild soloing against those slightly wooden backing vocals.

Speaking of the backing vocals, notice that they don’t blend as well with the backing track as the lead vocal does. I reckon this is because of a basic recording challenge that every studio engineer of this era had to wrestle with, namely how to rebalance an instrument or voice that wasn’t loud enough against the rest of the band. In this case, I’d guess that the long sustained backing-vocal chords simply couldn’t match the sheer volume of Elvis’s full-force rockabilly lead, so either the Jordanaires moved closer to the mic and/or the mic was turned up to achieve the desired level balance. Whichever it was, it’d primarily have boosted the dry backing-vocal level, whereas the amount of backing-vocal reverb picked up by all the mics in the room would have remained largely unchanged — hence the drier and less well-blended presentation for those voices.

A little background research furnished me with an additional thought-provoking little titbit about the recording sessions: apparently Elvis did 31 takes before he reached the final version. Stop and think about that for a moment. Thirty-one takes. I’d wager that a large number of project-studio folk have never done 31 takes of anything, let alone a full-band recording, and in a general sense it’s sobering to think how much the expectations and discipline of recording musicians appear to have changed in this respect, despite great performances being just as important as they ever were. It’s also noteworthy that Elvis must presumably have belted out this number for at least an hour before they nailed the keeper take, yet I get no sense that he’s holding back on the throttle at all. As such, the suitably grainy, slightly overdriven timbre of his voice must surely owe something to his vocal cords being a bit ragged by that point — a salient reminder of the important role session pacing plays in capturing appropriate vocal tones for any high-powered singer.