I Can't Make You Love Me 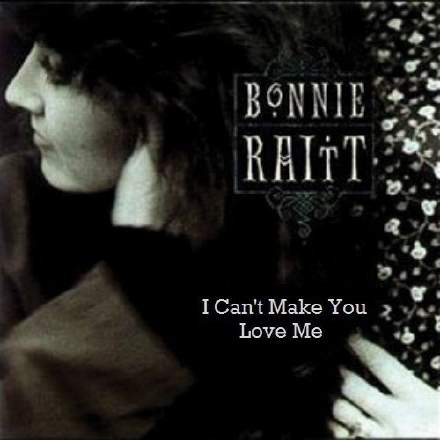 A classic Don Was production with Ed Cherney at the helm for the recording and engineering, this record sounds smoother than an eel in evening dress. The full and sustained bass part (with its subtle dusting of stereo mix effects) is, of course, a big reason for this, but there’s also plenty of harmonic padding being provided in the background. I can certainly hear an electric piano and Hammond in there, plus a string synth arriving around three minutes in, but I’m pretty sure there are also other less characterful synth parts lurking underneath as well — it’s very difficult to get this kind of soupy warmth without some careful layering.

One of the big calling cards of this song is the tag-team formed by Raitt and pianist Bruce Hornsby. Any vocal part will typically have moments where nothing new is happening, most commonly in the gaps between phrases, but also during long held notes — and there are plenty of both here. By inserting little piano fills during these momentary vocal lulls, Hornsby’s part fulfils two distinct purposes, to my mind: firstly, it acts simply as ‘ear-candy’, making the whole production more consistently interesting overall; and, secondly, it constantly refreshes the listener’s appreciation of the vocal part, because their attention is constantly diverted and then returned. The danger with this scheme is that overcooking the secondary instrument’s contributions can easily distract the listener too much, so that they lose the sense of the lyrics or their emotional connection with the singer’s performance — and you can easily suffer from mix clutter too. No risk of those problems here, though, because everything’s in such perfect taste: both the playing and the mix automation ensure that the piano interjections never overpower the vocal. Notice, for example, how the beginnings of the verses are deliberately left barer to allow Raitt’s vulnerable vocal expression to remain uninterrupted, and even when more elaborate filigree emerges later on it’s usually aimed squarely at larger inter-phrase gaps where it won’t interfere with the continuity of the sung lines.

But that’s not the only thing to notice about Hornsby’s contribution. He also frequently reiterates and reinterprets the song’s verse melody, thereby embedding it further into the audience’s consciousness. So, for example, you can hear him riffing on it before the first verse (0:17-0:32), at the tail end of the first chorus (2:00-2:15), and then in progressively more wayward fashion during the outro improvisation at 3:45. This elegantly demonstrates one of the truisms of musical arrangement: if you’re ever stuck for something to do in any musical part, try reworking what you’ve already got in the first instance — not only will that immediately make the new part seem to belong naturally to the song, but it’ll also improve the memorability of your basic musical material.

While we’re on the subject of musical taste, it’s worth mentioning that the drummer here is Tony Braunagel, and it’s a testament to his musical sensibility that this part is one of the most beautifully simple and restrained you’ll ever hear on record. And whether or not Don Was had a hand in this, he still earns serious respect from me for being able to smuggle in one of my most hated production clichés (those jingly bell-tree things first heard at 0:32) without my immediately breaking out in a rash!