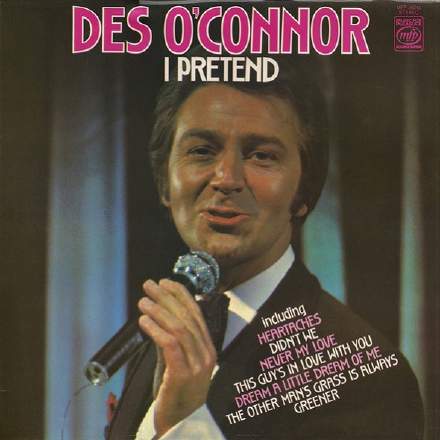 In my teens, I first became conscious of Des O’Connor (who sadly died recently at the age of 88) as the perma-smooth and self-deprecating variety/chat-show host who seemed to be a fixture of the weekday-evening telly schedule. Musically, though, I soon learnt that his name was mud as far as the cool kids at school were concerned, and would have scoffed heartily at the idea that he might have topped the UK charts back in 1968, when pop music was enjoying one of its purplest patches. But that’s exactly what he did with this song, a pretty amazing achievement when you consider some of the other number-one records that year: ‘Jumpin’ Jack Flash', ‘Hey Jude’, ‘Lady Madonna’, ‘Mony Mony’, ‘Congratulations’, ‘What A Wonderful World’, ‘Those Were The Days’, ‘Everlasting Love’…

What makes the record’s success perhaps even more surprising given modern preconceptions about the Swinging Sixties, is quite how safe and conventional the songwriting feels. The structure’s very straightforward, for a start: just Verse-Chorus-Verse-Chorus, give or take a two-bar ‘hello C major!’ intro and an outro that simply repeats the last four bars of the chorus. The harmony is fastidiously unchromatic too, the only mild dissonance arising from the (strictly tonal) dominant sevenths that modulate to F major (for the beginning of each chorus) and Bb major (under the chorus lyric “the world is new and like it used to be”). The almost exclusively consonant vocal melody hardly spices things up either, unless you count the rather tame 6-5 suspension first heard on “pretend” at 0:53.

There’s something a bit cookie-cutter about the construction of each of the main sections too. The eight-bar verse, for instance, has a bog-standard question-and-answer harmonic progression: each four-bar section starts I-vi-IV-Ic-V, but the first ends on the dominant chord while the second hurries the harmonic rhythm so it can tack a more stable tonic chord onto the end. With the sixteen-bar chorus, it’s the lead-line construction that feels formulaic to me, both on account of the rather laboured lyrical scaffolding (three lines of “I’ll pretend…” followed by one of “…I’ll pretend”) and the strongly imitative melody (where the second and third lines mimic the contours of the first, and the fourth line’s “till then I’ll just” likewise mimics the preceding “our love must end”).

And the arrangement feels like it’s just turning the handle as well, in a kind of MGM-country-musical mold. The ‘dum-de-dum’ bass rhythm. The electric-guitar ‘chnk’ and snare backbeat. The wordless choir. The harp glissandi and timpani rolls. The breezy violin countermelodies (bar that slightly incongruous fill after “exactly what I’d done” at 1:25). It’s all very slickly done, but it still sounds like everyone concerned is operating on autopilot.

Now, while there’s something to be said for an ‘if it ain’t broke’ approach in pop production, it’s also possible to have too much of a good thing in this respect. As such, I do wonder whether this kind of musical complacency is one of the big reasons Des has come in for so much flak over the years as a singer, despite his very creditable and charming croon and characteristically tight, focused vibrato (albeit with an occasional tendency to drift flat). How might his reception by us musos have differed had such a capable natural instrument been framed within more adventurous musical material?

Oh, and one amusing little detail to listen for before you go… Notice how the choir joins the lead line for the final “one day our love must end” at 2:24, but that they then leave Des on his own for the following line “till then I’ll just pretend”. All of them, that is, except for one unfortunate singer who accidentally joins him for the first word – and a little early too, so that you get a clear flam between the two ’t' consonants. Oops!