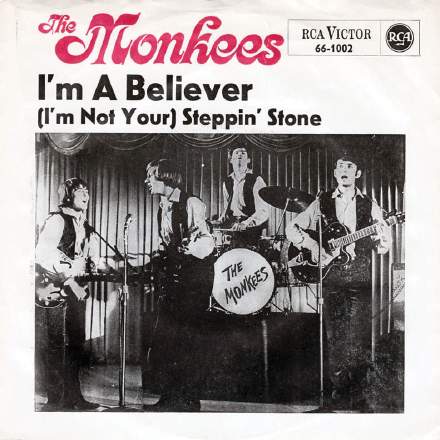 One of pop music’s hoariest old tricks is the addition of backbeat claps. A musical cousin of canned laughter, this usually seems designed to work by a kind of subliminal peer-pressure: “If all those people are clapping along,” it cajoles, “then surely the groove must be irresistible!” It never ceases to surprise me, therefore, how often such a pop staple sounds so lifeless and uninspiring on record, this Monkees song being a case in point. Check out the three backbeats following “meant for someone else but not for me” (0:13), for instance, which only appear to feature two or three people clapping (hardly a massive subliminal vote of confidence) and offer little more than a dead-sounding transient with none of the harmonic or acoustic complexity that clapping has in most normal real-world contexts.

Sensibly, the producers have chosen to blend in a tambourine alongside, the rich sustain of which rather effectively conceals the weaknesses of the raw clap timbre, and (for me, at least) somehow generates an illusion that there are more clappers in action than were actually recorded. Just try not to listen too carefully…

The tambourine’s place in the stereo picture is also worth mentioning, because although it initially appears to be panned off to the right (with the claps that are presumably on the same tape track), you can also hear a less prominent tambourine within the mono backing-band balance. This not only widens the combined tambourine image for the backbeats, but also causes the instrument to hop into the middle for the downbeat of the bar preceding the chorus, where it’s only played by the backing band.

Micky Dolenz’s lead vocal provides another intriguing stereo feature, inasmuch as it appears to be panned slightly to the left, rather than dead centre as you might normally expect. It’s not a question of the whole mix being left-heavy either, because the backing band remains resolutely down the middle. So was this an intentional mix decision?

I have heard some engineers suggest that slightly off-centre vocal panning can help with stereo separation without significant mono incompatibility issues, for instance, so maybe that’s a potential justification here. I have to say, though, that I’m inclined to concur with whoever remastered the track in 2006 and pulled down the left-channel level about 1.5dB to recentre the singing, because this also reduces the relative level of the backing vocals in the mix — no bad thing, given how they rather dominate the balance at moments such as “love was out to get me” at 0:16. (Incidentally, if you’re tracking down that remaster anyway, do have a listen to the ‘alternate version’ mix of this song too, as it makes the intricacies of Wrecking Crew regular Carol Kaye’s bass part much more clearly audible.)