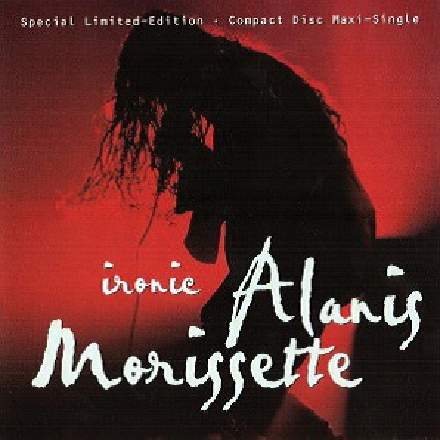 This song has been arguably the biggest single of Morissette’s career, and the album it comes from, Jagged Little Pill, remains one of my favourite ’90s records. Having played it to death at the time, though, I managed to lose the CD about 10 years ago (assuming my flatmate didn’t burn it!), and only got round to replacing it very recently. One of the things that surprises me most on returning to it with fresh ears is Morissette’s tuning, which is wayward enough that I’d expect almost any producer these days to correct it almost by reflex. However, the reason why it never bothered me at the time, and why a knee-jerk corrective impulse would have been particularly misguided in this instance, is that I really think that the tuning supports the performance. The unvarnished vagueness of the pitch centres in the ‘hai-ai-ai’ introduction and verses really cements the mood of whimsical cynicism there, for instance. Highlights in this respect include the wobbly pitch-rise of “Chardonnay” (0:26), the mocking exaggerations of “afraid to fly” (1:05), and the tetchy meandering of “cigarette break” (2:23). Furthermore, I think her general tendency to drift sharp in the choruses works well too, because it’s something many singers (and indeed instrumentalists) naturally do when they’re pushing the volume into straining territory, so I’d argue that it significantly reinforces the emotional intensity in this context.

Such beautifully judged manipulation of pitch is only one aspect of what is quite simply a phenomenal vocal performance. Just the variety of vocal deliveries used is tremendous, from the softest of head voices through to hard-edged belting, with moments of speech, whispers (“don’t you think” at 0:36), a fatalist half-laugh (2:37), sudden falsetto switches (1:08), and that trademark turbulent, whistling exhalation at the end of “thought” (1:48) thrown in for good measure. She even turns a breath into a hook, for heaven’s sake, when her big lungful at 2:43 mugs you into thinking the last chorus is coming two bars earlier than it actually does.

There’s some interesting panning during the first verse, with the lead vocal well to the right — solo the individual stereo channels and you’ll hear she’s at least 12dB down on the left side. However, given that the only other instrument in the mix is the acoustic guitar, which is panned in opposition, the only real casualty in terms of mass-market translation would be anyone hearing only one side of the mix. Even under those circumstances, though, mix engineer Chris Fogel’s sensible decision to avoid hard panning means that the left-side listener doesn’t lose the lyrics entirely. And the scheme isn’t without its pop-sensibility benefits either, because the sudden movement to the centre of the panorama for the first “It’s like rai-ee-ain…” flags up the switch to Alanis’s more powerful vocal delivery for stereo listeners, while single-speaker listeners get an additional level hike at the same point by virtue of the stereo-to-mono conversion.