Monty Norman's 'James Bond Theme' from the Dr. No soundtrack 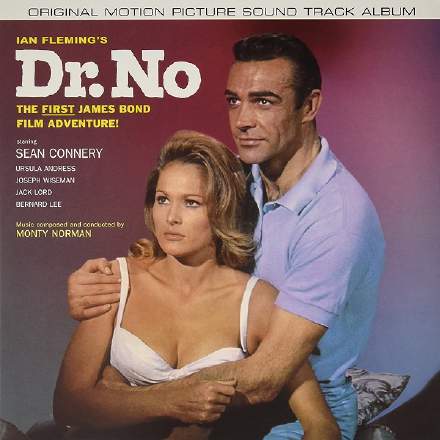 If you ask most musicians who wrote this famous tune, they’d say John Barry without hesitation. It was, however, the first Bond film’s main composer Monty Norman who originally dreamt it up. That said, I reckon that a lot of what people think of as ‘the James Bond theme’ is actually its arrangement – that menacing surf guitar, underscored by upright bass, vibes, soft sustained saxes, and insistent trombone backbeats; the powerful horn melody in the big-band section, punctuated by massive gong strikes and aggressive trombone countermelodies; and the cool percussive ‘inverse hemiola’ climax pitting snare, trumpets, and upper saxes against baritone saxes and trombones at 1:13. I imagine Barry might also have been responsible for the ‘treading water’ moments at 0:33 and 1:17, which could both easily have been omitted, but which I think actually help build the tension by virtue of generating anticipation for the theme that follows in each case.

Much has been said about the tunes and harmonies here, but something that really struck me was the juxtaposition of straight and swung grooves in the rhythmic texture. So although we start without any swing at all (the guitar melody and hi-hat clearly deliver straight eighths with equal sixteenth-note subdivisions), at the second iteration of the guitar tune (0:20) the muted horn overlays the opening motif of the subsequent swung-eighths big-band theme over it. Swung eighths then dominate with the arrival of the big-band section at 0:40 – you can hear them clearly in both the top-line melody and the drums. However, the unswung guitar line can still be heard in the background if you listen carefully, and the second section of trombone countermelody (first heard at 0:45) remains belligerently unswung too. Then after the fully swung section at 1:07-1:13, we get another jarring moment, where the swung ‘inverse hemiola’ stabs at 1:13 are followed by those five final unswung chords at 1:16.

With this in mind, I have to say that the performance that probably impresses me most here is the drummer’s, not only flitting between the straight and swung rhythms with consummate fluidity, but also providing some great arrangement support. Notice, for instance how the anticipated kick-drum downbeat lends weight to the horn melody’s second phrase in the big-band section, and how well this is combined with the little snare ‘rat-a-tat’ fill at 1:03. I also love the total rhythmic drop-out and deliciously long snare roll that leads into the following section at 1:05.

All these good things notwithstanding, however, there is something that bugs me a little bit about the way this cue ends. You see, I love how Barry chooses to build up that opening horn riff in stretto, with each entry starting a third above the last. But when he reaches the fourth entry, he decides to break the pattern and return to the E starting note for the final iteration, and somehow that just feels like it releases a bit of the harmonic tension prematurely, rather than taking the opportunity to ratchet it up one more notch. Have a listen, and see what you think. Here’s how Barry does it: Original Ending: play_arrow | get_app And here’s how I’d prefer he’d done it, starting the last stretto entry on D instead. Alternative Ending: play_arrow | get_app Now I can appreciate that maybe he wanted to end on an exact rendition of the theme, but was that really necessary by that point? The version starting on D is still immediately recognisable as a version of the Bond theme anyway (it is, after all, the exact same sequence of intervals), so I’m not sure what was gained there. Still, it got him the gig for another 11 Bond films, despite the lack of any accreditation on this one…