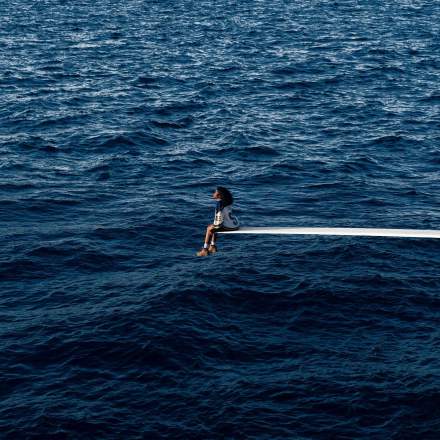 The big production hook of this record for me is the vibrato you can hear right from the outset. And it’s not just the wide range of pitch wobble and the slow modulation rate that make this effect stand out, but also the fact that the modulation waveform doesn’t appear to be synchronised to the song’s tempo – just as with echo effects, tempo-synchronised modulations are better at sinking into the background. Plus it sounds to me as if there’s a modulated low-pass filter operating in tandem with the vibrato, which futher emphasises the higher-pitched moments of each modulation cycle.

All in all, it’s a bold and ear-catching effect, but one that is, understandably, pretty rare in mainstream chart production, because of the way it adds ambiguity to the song’s harmonies and the lead-vocal pitching. (The only other vaguely comparably example I can think of is the plinky rhythm synth during the verses of Clean Bandit’s 'Rather Be'.) As such, I can see the expediency of keeping a fairly bass-heavy balance and sticking to a repeating four-bar chord pattern, rather than using harmonic progressions as a larger-scale songwriting tool.

And speaking of the harmony, I was struck by this song’s simlarity to Doja Cat’s 'Kiss Me More', as both feature a cycle-of-fifths chord progression within the Ab major scale, starting on a Bbm supertonic chord. But where Doja Cat’s pattern of fifths is contained within each four-bar section length (ie. Bbm-Eb-Ab-Db or ii-V-I-IV in Ab major), the fourth-bar chord in SZA’s song is a chromatically altered F major chord (ie. Bbm-Eb-Ab-F or ii-V-I-VI) which means that her pattern of fifths carries across between four-bar sections – as well as creating a nice little false relation between the Ab major chord’s root and the F major chord’s third.

But then Ms Cat has all those squishy sevenths. Ah, decisions, decisions…