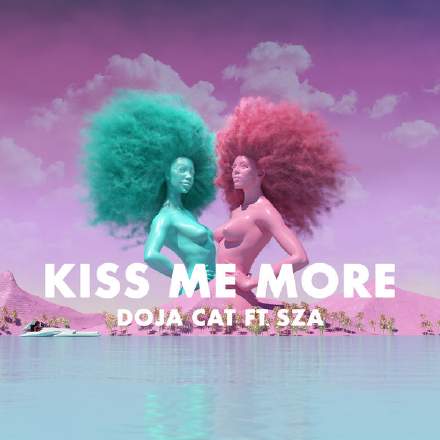 Although this is apparently based on the chorus of Olivia Newton-John’s early-80s song ‘Physical’, I can’t really see much similarity. (Did it even need clearing?) Still, I suppose we should be applauding such accreditation, seeing as high-profile artists have often been so stingy in that respect. Whatever its source, however, the harmonic progression is actually quite interesting.

You see, a lot of songs use repeating four-bar circle-of-fifths progressions, but these typically treat the home key chord as the destination towards which the cycle is progressing. The most common implementation of this is probably a simple chord-per-bar I-vi-ii-V pattern – as recently showcased in Olivia Rodrigo’s ‘Happier’, for instance. What’s nice in this Doja Cat song, though, is that the cycle’s destination is the IV chord instead, within a repeating chord sequence of ii-V-I-IV. Furthermore, there are many aspects of the harmony that lend it a kind of untethered, woozy quality. For a start, the progression puts the key chord of Ab major on the third bar of each repeating pattern, one of the weaker positions in terms of establishing the key. All the chords (including the tonic) are garnished with sevenths too, and there’s a nice 4-3 suspension on the Eb chord as well.

Another contributor to the general ‘drifting’ atmostphere is the haze of vocal reverb floating around in the background, and yet it doesn’t really recess the vocals as you might expect it to do. As is often the case with reverb effects, listening to the stereo Sides signal is instructive here, and I take several things from hearing that. The first is that the trade-off between reverb level and reverb time (a crucial balance to be struck with any reverb effect) has favoured the reverb time, so you get a lesser level of longer-lasting reverb. Because this results in a reverb signal that resembles the dry signal less closely, it inherently separates the dry and wet signals perceptually, so that the vocal stays forward, and the reverb remains more in the background.

There seems to be something like a 16th-note predelay going on too, I think, or else some of what we’re hearing as reverb is actually a separate feedback delay effect – either way, those would both also be tactics for keeping the vocal upfront. And, finally, it’s clear from the Sides signal that the reverb is not as bright as the direct sound, so that will be positioning it to the rear of the depth perspective as well.