by Noah And The Whale 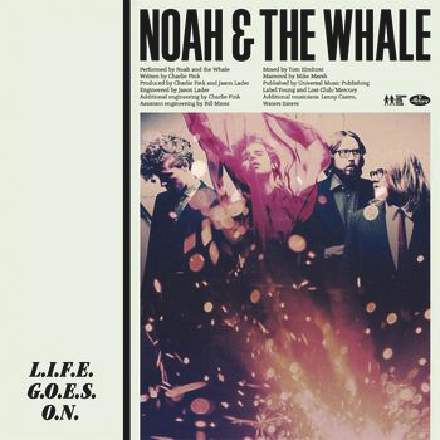 I find the oddball, singalong vibe of this track very endearing, and likewise a few specific production features. The first is the degree of looseness in terms of pitching and timing allowed to the lead vocal. On the face of it, it’s possible that the singer’s performance has been left completely unedited in this respect, but if Melodyne or whatever was involved (as I strongly suspect), then it’s a fantastic example of musical restraint on the part of the producers. The perceived ‘centres’ of most of the important notes are just tight enough to stop things feeling out of tune/time, but there’s enough waywardness in between them to maintain the quirky character of the delivery and offset the rigidity of the drum and backing vocal parts. Comparing the first and second verses in this respect is particularly rewarding — the first feels much looser than the second, which makes sense given that the latter’s added harmony line would draw attention to pitch/time vagaries much more readily. My only reservation is perhaps that the middle-section backing vocals maybe get a fraction too ‘Mutt Lange’ (think Shania Twain’s hoary old 'You're Still The One', say), to the point where they maybe undermine the alternative credentials a bit. It’s a fine line, though.

There are some nice simple arrangement touches too: the tambourine added during the choruses to help the backbeat cut through in the thicker texture; the increase in the apparent number of the chorus backing vocalists as the track progresses (whether by virtue of effects rides, additional overdubs, or both); and the nice understated ‘drop’ beginning to the final choruses, which keeps the hook fresh enough that the band can squeeze in an extra repeat for luck.

Less appealing to my ears is a rather abrasive frequency build-up at around 3.5kHz. I have no problem at all with the pivotal role this frequency plays in the record’s splendidly up-front vocal sound, but I don’t think enough effort has been made to clear space in this region on other tracks in the mix. The result is that the snare, bass distortion, tambourine, and backing vocals all compete in the same spectral zone during the choruses, making me instinctively reach to turn down the volume knob. The pity is that this harshness could have been effectively tackled either with narrow EQ cuts at mixdown, or with a single band of dynamic EQ during the mastering stage. Clearly it didn’t bother anyone at the time, though, so maybe it’s just me…

Another thing that strikes me is the prominent pitched resonances in the snare drum, which give it a great deal of sustain and therefore extra subjective prominence in the mix balance. In many band recordings it’s sensible to reduce such resonances to some extent to avoid ugly clashes with a song’s harmonies, which means that extra sustain (if required) usually has to be generated by compressing the drum’s own noise components, applying reverb-type effects, or triggering additional samples. However, what Noah And The Whale have done here is create a sound whose internal resonances are pitched to fit in pretty well with the song’s harmonies. For example, the main ‘C#’ pitch acts as a sixth over the home chord of ‘E’ major, as a third over ‘A’ major, and as a ninth over ‘B’ major – the three chords that the vast majority of the song is built on. If you listen to the comparatively isolated snare hit which starts the song, there appears also to be another lower ‘F#’ resonance too, and although this one cuts through the mix a lot less, it still fits in pretty well as a ninth over ‘E’ major, a sixth over ‘A’ major, and a fifth over ‘B’ major.

And, of course, this track also holds the honour of containing the most ‘Carry On’ drum fill I’ve ever heard (0:30). Oooh… Maayyy-tron!