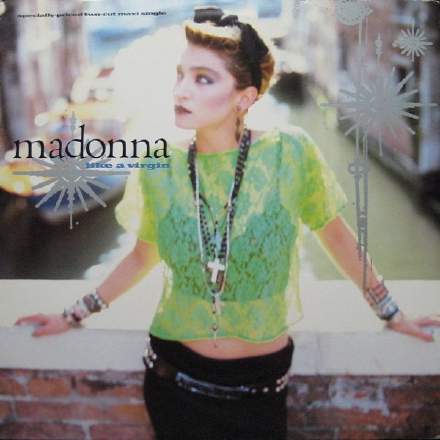 When I critiqued Michael Jackson’s 'Billie Jean' a couple of years back, I commented on how its super-transient drum sound felt less well suited to digital playback than to the cassettes and vinyl LPs that still dominated the market of the time. Well, this Madonna single is even spikier in this respect, and I honestly found it so fatiguing to listen to that I actually ended up putting a tape-simulator over it for listening purposes after only a couple of playthroughs! In the case of the Jackson record, it’s Bruce Swedien’s canny multi-reel recording process we have to thank, but for ‘Like A Virgin’ I suspect we’re hearing the ramifications of engineer Jason Corsaro persuading producer Nile Rodgers to use the Sony 3324, a bleeding-edge digital multitrack tape machine that had only just gone on sale a couple of years prior. You see, studio engineers who were accustomed to analogue multitrack tape were used to effectively preemphasising their drum sounds with extra high end and transient detail to compensate for unavoidable tape self-erasure losses, but when digital came along I think it took everyone a while to get out of the habit, resulting in lots of records that sounded rather brittle like this – especially when subsequently transferred to the burgeoning CD format. Indeed, some more recent rereleases have implicitly acknowledged this issue by softening the percussive edges at mastering.

The low end is fairly slimline and economical, and for similar headroom and mass-market translation reasons that I also discussed in my ‘Billie Jean’ critique. Despite this, though, there are some curiously sporadic low-frequency thuds sprinkled throughout the timeline, often out of sync with the song’s rhythm. While I can’t be sure, my best guess here is that we’re hearing low-frequency pulses from Madonna’s vocal mic, as most of the instances appear to coincide with consonants that I know from experience can generate wind-blasts on a mic capsule: “[heart]b[eat]” (0:56); “f[ound]” and f[or]" (0:20 & 1:20); “[lo]ve” and “v[irgin]” (1:12 & 1:44); “s[o]” (2:40); and w[ith] (2:51). And there are also instances under the aspirations at the end of the note at 2:05 and in the middle of the “[oo]h[oo]” at 2:47. In fact, it was only the one under “d[idn’t]” at 1:08 that gave me pause, because it’s not one I can remember encountering before, but a brief experiment singing that line with a hand held up in front of my face demonstrated that consonant’s potential for wind-blasts as well.

And while we’re on the subject of vocals, I had to chuckle to myself reading Corsaro’s description of the vocal tracking in this article: “Nile was difficult on singers, because he was very tuned into pitch… and he was so meticulous about pitch that he’d work on stuff for a very long time. That meant sometimes that it could be a little rough, but Madonna was always very, very professional and she came through and did a great job.” I really can’t bring myself to be quite that gentlemanly, frankly, because this is one of those songs where the frequently wayward tuning has always grated on me – “oo-oo-oo-hoo like a virgin” at 2:46 makes me wince every time! Now, to be fair, there were plenty of 80s productions that had equally tuning-challenged vocalists, but if what’s on record here came after Rodgers threw up his hands, then it’s not the greatest look for Ms Ciccone nonetheless…

Another interesting thing I noticed is the tempo variation, which I’m kind of assuming must have been implemented by some kind of tempo-stepped click track, given the song’s slightly clunky-sounding opening accelerando. It starts at roughly 117bpm, ratchets to around 118bpm in bar three, before stepping up to the 120bpm-ish pace it then maintains pretty consistently from then on, with the exception of a brief 118bpm lull for the middle section. The idea of using a tempo map is quite common these days, but I can imagine this kind of section-based timing regulation must have been fairly unusual in the early 80s, given that MIDI was then still in its earliest infancy.

And, finally, it’s worth pointing out that the only eight-bar sections in the first half of the song are the choruses, with the verse and prechorus lasting twelve and six bars respectively. I think this kind of thing exerts a subtle psychological effect on the listener, making the choruses feel just a touch more grounded and predictable. (For more examples of this kind of thing, check out my critiques of 'Wind Of Change' and 'Africa'.)