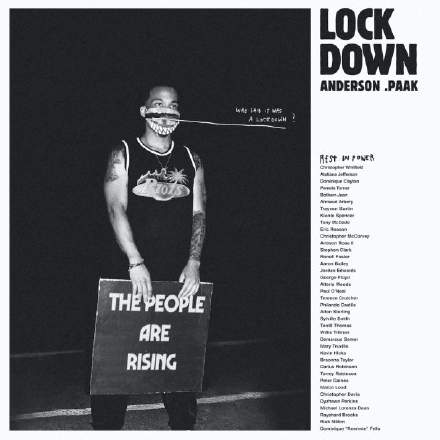 This is easily my favourite of all the songs I’ve heard so far about the BLM protests, because somehow it manages a breadth of scope that makes it feel almost like a State Of The Nation, taking in political hypocrisy, police tactics, coronavirus lockdowns, and even (in a lyrical tour de force at 0:53) the unemployment rate. Paak’s quiet intensity and sparing use of expletives only increase the authority and impact of his message too, in my view – something the video powerfully highlights by disconcertingly using visuals of him lip-syncing in a clearly more impassioned way for the section at 0:51-1:05.

And the vocals are also part of the recipe that gives this song one of the fullest and coolest low ends I’ve heard in a while. Because his vocal tone is quite light, and yet full of grain and character, it doesn’t need much lower-spectrum power to feel full and upfront, so that clears plenty of space for the tremendous kick+bass combination. I understand that Paak has been doing a fair bit of work with Dr Dre over the past couple of years, and the record is on Dre’s Aftermath label, but it seems that this particular song isn’t actually a Dre production. That said, this kick drum has classic Dre characteristics: there’s a powerful low-midrange punch that translates beautifully onto smaller speakers, as well as plenty of 50-80Hz power, but it also leaves ample space both in the time and frequency domains for the powerful, warm-sounding bass. This is something I always associate with one of my most treasured mix references, Dre’s album 2001, but where the low-end power of that album is now a little out of touch with modern, more sub-heavy records, ‘Lockdown’ is bang up to date in this respect, and the extra low end afforded to the kick drum as a result makes it somehow more able to stand on its own at the low end, where on 2001 its subjective weight is partially an illusion maintained by its combination with bass line. Suffice to say, this production has already made its way into my latest mix-referencing shortlist…

Another interesting element of this track is the drum programming. Now, I say ‘programming’, because that’s what I initially assumed it was given the tightness of the groove, the MPC-style track-mute arrangement tactics, and the limited number of basic drum patterns – there are essentially three, which you can hear one after the other under “Judge gotta watch us from the clock tower / Lil tear gas cleared the whole place out / I’ll be back with the hazmat for the next round”. However:

So what we’re actually looking at here, I’d say, is live drumming, and I suspect that might also be a reason why the production’s groove feels so musical – in this respect it reminds me of another of my favourite records, the 2002 rerelease of N.E.R.D.’s In Search Of… However, assuming that this is the case, I have to say that I wish Paak had allowed himself more leeway for variation, because if you’ve heard his live version on The Late Late Show, I think you’ll agree that he has considerable flare for show-stopping fills.