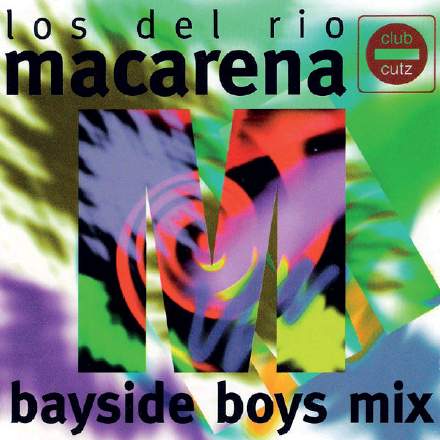 I think of myself as a fairly positive kind of guy, but this track doesn’t half strain the old joie de vivre . Yes, I’m sure I danced those daft moves at some point back in the late ’90s. (Was there any college student who didn’t, at least ‘ironically’?) And I realise it topped the Billboard charts for 14 weeks and sold upwards of 10 million copies. But, much as it pains me to admit it, the Spice Girls' 'Wannabe' will always hold a special place in my heart for preventing ‘Macarena’ hitting UK number one.

Probably what appals me most is how ‘phoned-in’ the vocal verses are here: out of tune, with sloppy timing and poor enunciation, and yet at the same time rather hammy, especially during the spoken bridge at 1:25. It doesn’t help that they also sound like they’ve been recorded too close to a cheap dynamic mic, giving an unflatteringly constricted and muffled tone. Putting aside my own rather elitist preferences, though, there is perhaps an argument that the very amateurishness of those parts helped set ‘Macarena’ apart from its ’90s club contemporaries and added a certain ‘girl next door’ appeal to the performances.

I will confess to some curiosity regarding the nature of that massed vocal “aa-eye” first heard at 0:08. It’s possible it could just be some kind of ‘tribal gathering’ sample, perhaps with some gated reverb to thicken things up. However, the more exposed renditions at 2:00 have a strangely pulsating sextuplet feel to them, as well as a hint of phasiness, so I wonder whether what we’re hearing is that old sampler trick of triggering the same one-shot sample several times in quick succession, using a sampler set to ignore MIDI Note Off messages (like many simple drum machines).

My favourite part of this production is the introduction, though — and not just because the verse vocals aren’t in it! You see, in the absence of any other information at the start of the song, it’s natural to hear the opening synth riff as beginning on the downbeat. It turns out, though, that it starts on the second eighth note of the bar, but you only begin to suspect this when the wordless vocal line arrives on the real downbeat at 0:04, and you only get proper confirmation when the four-to-the-floor kick enters at 0:09. After that nice little rhythmic hiccup, however, it’s all downhill from there…