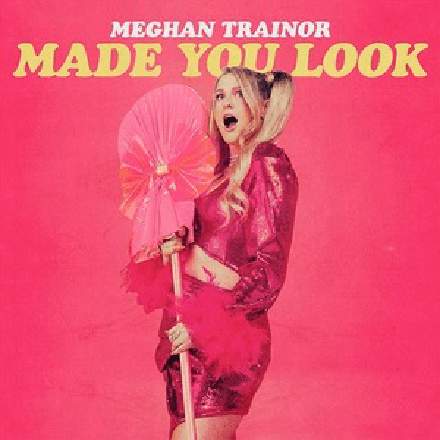 Talking about this recent comeback hit in an interview with Billboard, Meghan Trainor said: “I was really studying 'All About That Bass'. I was, like, ‘Why did this work so well?'” And if you compare the two songs side-by-side, there are plenty of similarities:

But what’s just as interesting to me is how the two versions differ. Harmonically, the new song has more going on than the simple I-ii-V-I repetition of ‘All About That Bass’. Yes, the first part of the verse is just I-IV-V-I, but the chorus adds in a fleeting cadence into the relative minor to expand that to I-III-vi-IV-V-I, and then the Prechorus introduces an ‘open’ progression of vi-I-II-V (with another fleeting cadence, this time into the dominant). This gives ‘Made You Look’ more of a sense of urgency and forward momentum than its predecessor, if you ask me – and impression compounded by the slightly faster tempo (145bpm versus 134bpm) and the half-step-higher key ( Bb versus A).

And the other telling difference is that the new song is almost a whole minute shorter, despite boasting the same chorus count. Sure, the higher tempo accounts for about 10 seconds of that, but the prechoruses have also been halved (eight bars rather than sixteen) and the eight-bar instrumental outro’s been ditched completely. The Choruses have also been shifted forward in the structure – where ‘All About That Bass’ finished off with a triple chorus, ‘Made You Look’ shunts one of those choruses forward to already deliver a double chorus after the first prechorus.

For me, these methods of intensifying and shortening the pop listening experience are clearly symptomatic of the impact that streaming has had on music production over the past eight years. For a start, shorter songs effectively game the streaming royalities system, which is basically pay-per-play irrespective of how long your song is – shorter songs mean more song plays per hour from anyone playing your song/album/playlist on repeat (as many fans do). There have also been suggestions that the music-recommendation algorithms on some streaming platforms are penalising longer songs on principle, or simply as a byproduct of the fact that longer songs are more likely to be skipped before they reach the end, and are therefore deemed less likeable. (Remember I mentioned that Trainor had ditched the instrumental outro for ‘Made You Look’?) And, also, quite aside from the streaming mechanics, shorter songs means more opportunities per album for ‘feat. A.N.Other’ audience-crossover marketing.

All of which suggests to me that Meghan Trainor is well aware which way the wind’s blowing, and has reshaped her ‘All About That Bass’ mould for ‘Made You Look’ accordingly. And, reading further in that same Billboard interview, it sounds like she’s in tune with the Zeitgeist for her marketing too: “Obviously, TikTok rules the world. For the last album, I was like, ‘I’ll do every piece of promo you want me to do. If this works, I’ll do it.’ But it didn’t work. So, for this album, I made a priority to do ‘TikTok days’ and make content… I’ve been more real and open than ever. I even talk about my love for MiraLAX online. The best part of that is that it seems to be what everyone likes. They like me being myself.” Colour me ‘unsurprised’ that the success of ‘Made You Look’ was driven by a viral TikTok dance video…